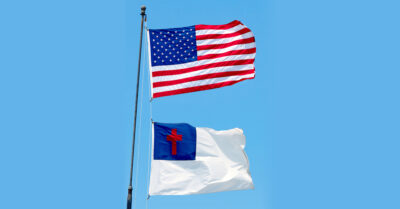 Early in the twentieth century, American radicals, sharply aware of the irrelevance of the church, caricatured its role and message savagely and sometimes blasphemously. The most popular such caricature was the hymn, “In the Sweet By and By,” which became, “Pies in the Sky, By and By.” The fundamentalists only became more monastic, whereas the modernists adopted all the more the socialism of the radicals.

The net result was that Biblical faith was denied by both, and the faith made unreal. The churches grew numerically, but meanwhile declined in strength and in effectiveness. The change between even the late 1940s and the 1970s was dramatically illustrated by a nurse, who after some years of absence from nursing, returned to the hospital where she began her career. It was in a Southern city, deep in the Bible Belt, where almost everyone attends church, and most churches are fundamentalist. Earlier, emergency patients coming to the hospital prayed and asked for their pastor. In the 1970s, after two years of experience, she found only one person who even mentioned the Lord at the time of crisis. The rest were pleased the next day when their pastor called, but their professed faith was not essential to them. Because God is sovereign and absolute, our faith in Him will either govern every area of life, thought, and being, or finally He will be rejected in all. We cannot have half a God: Biblical religion is an all-or-nothing proposition. But men want the form of godliness, but not God. They attempt to use the church as a hiding place from God. St. Paul warned Timothy against all such, who are men “having a form of godliness, but denying the power thereof: from such turn away” (2 Tim. 3:5). The modern church, however, modernist and fundamentalist, is bent on pleasing all such rather than turning away from them.

The result is cheap religion, very popular religion, because it promises heaven without any cost to man. It is antinomian religion: it requires no fruit-bearing to the Lord, no tithing, no growth, only a “decision” for Christ, who is expected then to be grateful and mindful of man the sovereign. Such religion is like the seed sown on stony ground, which tribulation or persecution quickly destroys (Matt. 13:18–22). It has a very promising present, but no future.

What, then, is the future for the Christian faith in America? The growing crisis in the United States, an aspect of world crisis greater than the world has ever known, is the crisis of humanism and its sister, Arminianism. The crisis created by humanism and Arminianism is now threatening to destroy them. Men are working to postpone the reckoning, to create stopgap solutions, and to put Band-Aids on the cancer of civilization, but it will not work.

Either the world will settle miserably into a dark age of savage character, or it will be captured by Biblical faith. There are no other alternatives.

This crisis places a great responsibility on the champions of sovereign grace. Their faith must be more than churchianity: it must rather be the declaration of the crown rights of King Jesus in every area of life. Christ the King must command the person, church, state, school, family, vocations, the arts and sciences, and all things else. He must be served by man wherever he is and with all his heart, mind, and being.

Is this possible? Can the small numbers of sovereign-grace men triumph in the face of so great an enemy? The answer is simply this: it is impossible for the sovereign God not to conquer. His purpose in all these things is to shake all things which can be shaken, so that alone will stand that which cannot be shaken (Heb. 12:25–29).

The Scriptures are clear, moreover, that the power of evil, however seemingly great and entrenched, is a short-term matter. David, who saw the wicked flourish and hunt him like a wild animal, still could declare, “Many sorrows shall be to the wicked: but he that trusteth in the Lord, mercy shall compass him about” (Ps. 32:10). Again, he declares, “For the arms of the wicked shall be broken: but the Lord upholdeth the righteous” (Ps. 37:17). Indeed, “The meek shall inherit the earth; and shall delight themselves in the abundance of peace” (Ps. 37:11, cf. v. 10).

Asaph declares, “For, lo, they that are far from thee shall perish: thou hast destroyed all them that go a whoring from thee” (Ps. 73:27). Solomon makes clear God’s purpose:

For the upright shall dwell in the land, and the perfect shall remain in it, But the wicked shall be cut off from the earth, and the transgressors shall be rooted out of it. (Prov. 2:21–22)

Our Lord concludes His Sermon on the Mount by declaring that every “house,” i.e., person, life, institution, church, or nation, which is built upon sand shall perish in the judgments which God regularly sends upon earth, whereas only the persons, institutions, and nations which are established upon the Rock, Jesus Christ Himself, shall stand the shakings and testings (Matt. 7:24–27).

We are approaching such a time of judgment. All other houses shall fall and be swept away by the winds of history and the floods of judgment. Only those who build upon Christ the Lord will endure.

This, then, is a time for building, for building on the foundation of Jesus Christ. Christian schools, churches, seminaries, political agencies, economic enterprises, vocational ventures, and much, much more must be started, wisely and carefully, but also eagerly as an opportunity for setting forth the crown rights of Christ the King.

This has already begun. In one area alone, the world is startled by our success. Christian schools are growing steadily and commanding even the children of the unbelieving. Those who a few years ago believed that the Reformed faith was dead are now being challenged by it on all sides. New churches are appearing, and the cause of sovereign grace is rapidly expanding. We are on the verge of the greatest growth in scope and power of truly Biblical faith which the world has ever seen.

The motto of the state of Nevada is an apt one for our cause: “Battle Born.” In the parable of the sower, the heat of the sun, adversity, causes the false seed to perish, because of the stony ground of their being. Adversity only strengthens the godly. Battle born, they grow in adversity and become strong men in Christ. The future thus is our’s in Christ, because “the earth is the Lord’s and the fullness thereof; the world, and they that dwell therein” (Ps. 24:1). We are fighting on home ground under the Sovereign Lord of all creation. We are battle born, fighting on home ground, under Christ the King. With St. Paul we must say, “If God be for us, who can be against us?” (Rom. 8:31).