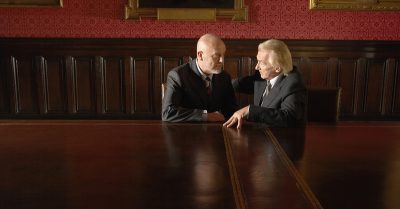 G. William Domhoff, associate professor of Psychology of the University of California at Santa Cruz, has written a very interesting study of Who Rules America? (Prentice-Hall, Inc., Englewood Cliffs, New Jersey. 1967) The book is extensively researched; Domhoff goes to conservative sources, such as Dan Smoot, as well as to very liberal writers. But he could not be more wrong in his conclusions. Domhoff finds that “the American upper class” controls the executive branch of the U.S. government, controls foundations, education, the C.I.A, most important corporations, mass media, and much more. There is a “governing class” in America, he believes, and he lumps together such families as the Rockefellers, the Pews, and the Lillys as a more or less working team in this “governing class.”

How does he define this “governing class?” Here Domhoff is a faithful scholar: he gives us his premise:

Domhoffs thesis is not unlike C. Wright Mill’s The Power Elite. And there are many such studies written, from both the right and the left.

Let us examine this idea from the perspective of an old American belief, in the natural aristocracy of talent. The founders of the United States believed in an aristocracy, but not an hereditary one but in the natural aristocracy of ability and talent. Such an aristocracy always rises to the top: the best attitude of a country should be to further its progress to the top rather than to impede it. In other words, superiority asserts itself and governs. If the moral character, if the faith of a people is defective, then the superiority which prevails is of an evil sort, but, if the character be godly, then a godly superiority prevails.

This does not eliminate the fact of conspiracies. Any group of people who take counsel together to gain an end or goal are conspiring, whether for good or evil. If the times are evil, then the superior men of evil will prevail. If it be an age of sound faith and character, then superior men of righteousness will prevail.

With this in mind, let us examine some of the conspiracy ideas which are commonly bandied about in some circles. Some maintain that a Jewish conspiracy secretly governs the world; what they are actually saying then is that the Jews are the world’s true elite and that a handful of them can govern the vast masses of the world. Others hold that the real conspiracy is a German one, and everything is viewed in terms of a new German threat; again, these people are declaring implicitly the superiority of Germans and their belief that only a world anti-German policy can save us from the German menace. Still others see the threat as an English one, involving the Rhodes funds and much more; again, this is a confession of English superiority.

But there are conspiracies, and they are a threat, some will protest, and they are right—up to a point. Let us examine one of them, where court and federal records document the conspiracy: communism. In the hands of Karl Marx, a sorry, disorganized bumbler, Marxism was simply wild, confused hatred. But superior men, but evil men, took over, and they made Marxism an instrument of power and superiority. Take Lenin: vicious, depraved, ruthless, all that and more, but also very intelligent, clearly superior. His writings are still amazing reading, and they explain why, in an evil age, he could ride that tide to power. For example, he saw clearly that any abandonment of gold as money, and the adoption of a central banking system, was nine-tenths of socialism, so that the logic of economics would drive a world going off gold and into central banking into communism in time. We are busy today proving Lenin was right here and elsewhere. When Khrushchev said, “We will bury you” he had in mind the inevitability of the forces at work in the free world. Get rid of every communist in the United States, sever relations with the Soviet Union, and defeat communists in Vietnam and elsewhere, and the U.S. will still go communist because of its present monetary policy, one in operation for a generation and more. The worst “communism” in the U.S. is that which is written into our monetary policy, and there is no sign of a change.

Am I suggesting that we stop fighting communism? Far from it. But you can’t fight atom bombs with pop guns.

Let us examine the basic issue: First, a natural aristocracy of talent always rises to the top in a society congenial to its moral bent. This is true even where a hereditary caste exists. Over the centuries, many of the nobility, and royalty, rose and fell in terms of their ability or inability to rule. We may sometimes regret the passing of a good line, but if it fell, it was either through inability to rule, or, if they were still able, because the moral foundations of their rule were destroyed. In old Russia, the schools and universities created a generation of men whose moral foundations were anarchistic and anti-Christian: this new breed represented tremendous but evil ability, and the war enabled them to capture power. The moral foundations were at the same time destroyed in a number of countries: the difference in the time of collapse was made by the crisis of the war and the blockade of Russia. Today, those same moral foundations are virtually gone everywhere.

Second, because there will always be a governing class, and that governing class will reflect the good or evil directions and impulses dominant in society, it is important therefore to do things, one to produce and train a superior class, and two, to produce and train a vast body of people who will want the leadership that new superior class can provide.

It is most certainly necessary to fight against subversion and against heresy, but something more is needed, a new faith and character in society at large, and a new leadership, a new governing class in terms of that faith and character.

Today, the liberal and leftist establishments or governing classes prevail in virtually every area of the world. They are powerful, but they are sterile. They have promised the humanistic masses they rule a paradise on earth, and increasing disillusion with their promises and abilities is leading to a generation of drop-outs, people who believe the liberal myth but disbelieve increasingly in its leaders. These revolting youths are themselves sterile: they share the same myth and lack the capacity to communicate it or realize it.

What needs to be done is, first, to bring forth a new people. This is the basic task of evangelism. Moral dry-rot has not only destroyed the older Christendom but the newer humanistic world order. There can be no new class as long as we remain tied to the forms of the old, such as statist schools. Truly Christian schools must be established, and both old and young re-educated in terms of a total faith. Every sphere of life must be viewed in terms of the whole counsel of God.

Remember, there will always be a governing class. Our present schools, colleges, universities, churches, and foundations are essentially geared to producing a humanistic leadership. Fight this order all you will, but as long is it shapes the minds of the leaders and the followers, it will continue to prevail. Document its evils and chronicle its corruptions all you want, and you will not change it unless at the same time you work to establish a new people, and a new leadership.

This is our purpose. Are you with us?