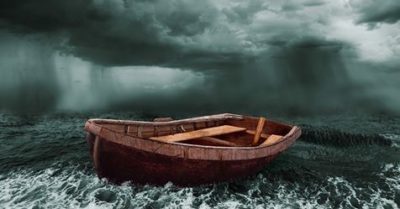 We all remember the Y2K scare of three years ago. No one really knew what would happen to all those microprocessors in our lives once the date codes rolled over from "99" to "00." The consequences were potentially devastating — no electricity, no transportation, no banks, no gasoline, no water…. Some prognosticators warned that Western civilization could come to a grinding halt. In the two or three years before January 1, 2000, makers of dehydrated foods, oil lamps, generators, and well pumps enjoyed a booming business. Some people moved out of the cities and into remote rural retreats to avoid the urban chaos that would result if basic services shut down.

What actually happened was insignificant, given the number of radical lifestyle changes and rush orders from Lehman's. Panic turned to sheepish embarrassment, and a few people had to console themselves with the fact that they were now ready for any natural disaster.

I myself had not been immune to concern. In 1997 I started following the news and Internet chats on Y2K, and by early 1998 I was alarmed as well. I began to take a few inexpensive steps to prepare for power outages and the like. Over time, however, I began to realize that the market economy was more resilient than I had given it credit for. Those with the greatest incentives to solve Y2K problems — those whose factories would shut down if they were not solved — didn't appear overly concerned. By the fall of 1999, most of my worry had evaporated, and I could tell a reporter for a local newspaper that I believed the stock market would handle the Y2K threat without a significant decline.

The Y2K episode should at least inspire some caution about what I call the "lifeboat syndrome" — the tendency to put more resources and more consideration into preparing for extraordinary disasters than preparing for normal conditions. If a ship's entire crew is occupied with inspecting and stocking the lifeboats, no one will be available to stoke the furnace, and the ship will not sail.

Certainly it is foolish to ignore a significant risk. The wise man, Proverbs 22:3 tells us, foresees what is coming and "hides himself" from danger. We will differ in what we regard as serious risks. Foresight is not evenly distributed among mankind, and some of us will perceive certain risks more accurately or clearly than others. Some people, however, cross the line into gullibility, acting on Chicken Little prophecies of calamity without due consideration. All too many of that credulous group have been left dead in the water financially and culturally because they were too focused on stocking the lifeboat.

The Counsel of Multitudes

One safeguard against the unbalanced life produced by the lifeboat syndrome is to seek counsel from those wiser than ourselves. Proverbs 15:22 affirms that there is wisdom in a "multitude of counselors" that will prevent our plans from going astray. Often we neglect what is, in a market economy, one of the best and most systematic ways of obtaining the wisdom of a "multitude of counselors." That is the price system. Do we think a decline in oil production is imminent? A quick look at oil prices will let us know if the countless other participants in the oil market share our views. If the price is not rising, we had better re-examine the reasons for our prediction. This is not to say that the maverick cannot be correct, or that one should never act against a market trend. Certainly there are times when an individual will purposefully act contrary to the market, and enjoy large benefits. Yet we should have an attitude of humility when we approach the embodiment of thousands of professional individual assessments of value.

The stock market is one of the best examples of prices-as-information, because the modern stock market responds so quickly and efficiently to relevant changes in market conditions. Many stock traders believe they can "beat the market" because of unique information or a special idea that the rest of the market does not possess. In their individual assessment, a stock might be underpriced, so they will buy in the expectation that the rest of the market will catch on and bid up the price. Sometimes they are right (or at least they appear to be right when they make money in spite of some erroneous ideas). In many cases, however, their returns are meager or negative because they underestimated the quality of the information embedded in that market price. Financial advisors therefore have good reasons for suggesting that investors "buy and hold." It is very difficult to accumulate even a fraction of the prodigious amount of up-to-the-minute information that the rest of the market possesses, and analyze it more successfully in a timely manner. Prices are a valuable form of counsel, a conveyor of information, that tempers our impulses and checks exaggerated fears.

This struck me as I continued to study the Y2K problem in 1998 and 1999. If the situation was so dire, why wasn't the stock market reaction consistent with that information? Because of (or in spite of?) my training in economics, I had a healthy respect for the ability of the market to acquire and process information. After all, the reason anti-market economies fail, on a practical level, is that they lack information. In socialist economies, the handful of bureaucrats who are trying to collect and process enough information to produce and distribute goods and services may truly be experts in their fields. But they routinely fail, because they have disdained prices — the counsel of multitudes.

Back to disaster preparedness. Was it (is it) unwise to build an underground bunker to protect against nuclear war? Was it unwise to liquidate the stock portfolio and head for the hills before Y2K? Perhaps not. I am not averse to preparedness, and my own household is probably better prepared for disasters of various types than 95 percent of the American public. During the anthrax scare of last fall I might have purchased some Cipro had I not already had an antibiotic at home. It would not have been an expensive precaution.

Particularly for those of us with lower- or middle-class incomes, however, it is easy to overspend on precautions. Some preparedness options require such a dramatic change in the use of household resources that if the disaster does not occur, the household is much worse off. So much has been dedicated to the small chance of widespread disaster that the more likely scenarios will result in a sort of personal disaster — lower income because of the pay cut taken to switch to that "disaster-proof" job, selling the cabin in the woods at a loss, never recouping the expense on the solar panels and deep-cycle batteries, not to mention recovering credibility with friends and family members. Some individuals who live in a perpetual state of Henny-Penny consternation, backing away from one looming catastrophe after another, have backed into a catastrophe of a different sort. Rather than succumb to the "lifeboat syndrome," we should carefully weigh relative risks so that we use household resources wisely and remain influential in the culture.

Timothy Terrell is associate professor of economics at Wofford College in Spartanburg, South Carolina. He is assistant editor of the Quarterly Journal of Austrian Economics and is an Associated Scholar with the Mises Institute.