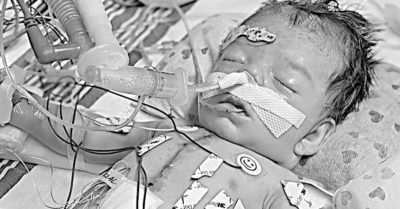 When my grandson, Holden Porter Selbrede, was born seven weeks early on Good Friday 2020, everything looked fine initially. It’s not unusual for a preemie weighing under four pounds to need oxygen at the outset of life outside the womb.

But several days later Holden still couldn’t do without oxygen, and the worried parents (my son Christian and daughter-in-law Megan) had to wait interminably for tests to tell what was wrong. The infant was transferred to Dell Children’s Medical Center in downtown Austin—in the middle of the Covid-19 lockdown. It wasn’t long before only one of Holden’s parents was allowed in the hospital at a time.

The echocardiogram showed that Holden had hypoplastic left heart syndrome, a congenital heart defect where the chamber of his heart responsible for pumping blood to his body was too small. This explained his gasping for oxygen. His heart was also pumping too much blood to his lungs, which stood to damage those blood vessels from excess pressure.

Neonatal cardiac surgery had advanced far enough to provide a solution, albeit a risky one involving three staged open-heart surgeries to alter the way the heart pumps blood. The alternative was unacceptable: “comfort care” until he died in the hospital. With many hundreds praying for the young boy, Holden started down the long, dangerous path to convert a faulty four-chamber heart into a working three-chamber heart.

Two Open-Heart Surgeries Before His Due Date

Holden’s first open-heart surgery was to install constrictive bands on the vessels leading from his heart to his lungs—the vessels where the pressure was too high. PAB (Pulmonary Arterial Banding) readjusted the flow balance between his lungs and his body as a temporary measure. Photos show how many tubes and sensors were distributed over the child’s body—he was monitored non-stop twenty-four hours a day. Like many preemies, he had minor bleeding in the brain, but this was a barrier to proceeding with the next surgery, the Norwood Bypass. He was being fed donor’s breast milk through a feeding tube through his nose. Observers noted that he was definitely a fighter.

When complications arose, the surgical team convened and determined that it was time for the Norwood, which is considered the most dangerous, highest risk operation in Holden’s future. He wasn’t even at his due date! The changes in the flow of blood through the heart following the Norwood would allow the previous constricting bands to be removed, setting him up for the next two procedures: the Glenn operation by the end of 2020 or so, and the Fontan procedure between the ages of two to five years. Each subsequent operation is less risky than the one before (risk being intrinsic to any surgery upon the heart, especially surgeries that reconfigure how the heart actually does its work).

Christian and Megan were gratified at the outpouring of prayer for Holden’s sake, and he made it through the Norwood very well: it was his second open-heart surgery before he turned two months old! Day by day some of the invasive tubes and catheters were being removed as the boy’s need for them decreased. Adequate feeding became a new post-surgical problem, however, and as this is being written he is being considered for a g-tube (gastrostomy tube) to provide supplemental feeding directly into his stomach. That would be his third surgery at the hospital, which we pray won’t ultimately be necessary, but at three months old he weighs less than seven pounds and needs to gain weight to thrive.

We are grateful for the continued prayer support from our Chalcedon supporters for this young warrior for Christ, while marveling at the miracles of modern medicine when they’re directed to the actual preservation of life.