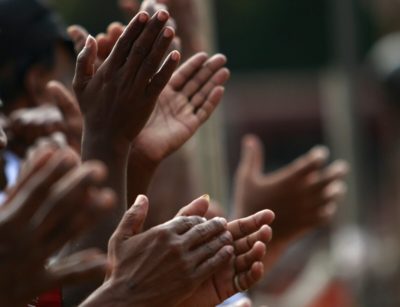 One of the very important and revealing moments of our Lord’s life occurred at the great feast of ingathering at the Temple. Because His teaching so clearly manifested Who He was, it created a sensation. The leaders, the chief priests and Pharisees, sent officers to arrest Jesus. The men returned empty-handed. These powers in Judea demanded, “Why have ye not brought him?” The officers answered, “Never man spake like this man.” In disgust, the Pharisees said, “Have any of the rulers or of the Pharisees believed on him?” (John 7:44–48).

What they were plainly saying was this: no men of prestige, no academicians, scholars, or intellectuals believe in this man. How can you be so foolish as to be swayed by Him?

I submit that you have to understand this episode to appreciate what is happening in the church. The lust for respectability has possessed all kinds of groups and persons. If our Lord were to reappear briefly, instead of casting out demons, He would have to cast out the insatiable lust for respectability in countless Christians and churches. I am regularly told by people that they do agree with us, but they cannot afford to be open about it because of the common belief that we are “outside the camp” of the modern saints and not respectable! Poor, pitiable men!

Both in and out of the church, this lust for respectability dominates our time. Of course, we are all familiar with its most common form, the nouveau riche, the newly rich, or the pretentious parvenus. They are also called social climbers. The sad fact is that very often these people are already equal to or better than those whom they are trying to emulate and into whose circles they are trying to move. Our so-called elite, both in and out of the church, are today usually the epitome of sterility and impotence. For anyone to see any advantage in moving into such circles is pathetic and very sad.

One area where it is very prevalent is in the academic community. There are actually church schools which not only seek state funds, but also state accreditation and teacher certification. There are Christian colleges and seminaries, virtually all, in fact, who boast of their accreditation. This is comparable to believing that Christ should never have begun His ministry without first being certified by the Sanhedrin!

Some will defend themselves by saying that we have set up our own accreditation agency, which they have, in the image of the enemy’s committees! The whole thing is a façade for the lust for respectability.

It is worth noting that some famous universities, such as Harvard, are not accredited. Accreditation is a weapon used by the intellectual establishment to keep the opposition impotent.

I believe that respectability has become one of the great evils of our time. Seminary professors write, not for the Lord’s congregation, but for the opposition, which pays no attention to their work. The monographs and articles by “reformed” and “evangelical” scholars are never used or considered by the modernists unless these men surrender their faith to become a part of the anti-Christian intellectual establishment. This is why the seminary scene is so pitiful a one. These seminaries, in more ways than one, look to the population for approval, not to the Lord.

But this lust for respectability is a death of power in the Lord. Over the centuries, and in many parts of the world today, Christians were and are imprisoned or executed for their faith, while here our churchmen are unwilling to lose respectability for Christ’s sake! I believe our respectable churches and churchmen have become an abomination, a stench in God’s nostrils.

Now, the word respect is a good word, potentially, as is respectability. The problem is the context. There is a difference in being respected by dedicated and self-sacrificing Christians, and being respected by a motorcycle gang, abortionists, or criminals.

St. Paul could say, as he stood before the high priest and the Sanhedrin, “Men and brethren, I have lived in all good conscience before God until (or, down to) this day” (Acts 23:1).

The lust for respectability is at war with conscience. Even if we want the approval of “nice” people, we are saying that the opinion of “leading” people weighs more heavily with us than does the standing we have before God and His opinion of our goals. Remember what Paul says in 2 Corinthians 13:7: “Now I pray to God that ye do no evil; not that we should appear approved, but that ye should do that which is honest, though we be as reprobates.” (The Berkeley Version rendered this verse, “But we make supplication to God that ye may practice no wrong; and our purpose is not that our integrity shall be shown, but that ye may behave well, even though we be classed as counterfeits.”) Think that one over. False churchmen in the New Testament era prized respectability above faithfulness and virtue, and they actually viewed St. Paul as a reprobate or a counterfeit! So much for the respectable Christians of that day. What would they do to him now?

Respectability can at times lead to strange places. George Orwell wrote in 1943 that to be a man who loved his country made him low class, whereas the intellectuals would have praised him and elevated him if he wrote, “a shelf of books in praise of sodomy” (Stephen Lutman, “Orwell’s Patriotism,” in Walter Laqueur and George L. Mosse, eds., Literature and Politics in the Twentieth Century [1967], pp. 150–151).

The arts have replaced Christianity in the modern era as the source of inspiration. Amoralism has replaced morality. In terms of our world today, respectability in intellectual circles goes hand in hand with a contempt for Christianity, and in church circles, with an emphasis on minimal Christianity. The false gospel of the churches holds that a simple, “I believe in Jesus,” can cover all our sins, and give us freedom to indulge in our lust for respectability. But Christ’s atonement alone covers our sins, and our only valid response to His atoning death and our salvation is to be totally and unreservedly faithful to Him, and to obey His law-word. Having given us everything, He will not accept cheap words from us. It is said that hell is paved with good intentions; no doubt it is also full of respectable people!