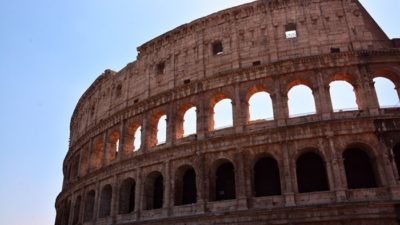 Almost at once, the early church attracted hostility and soon had pagan philosophers attacking it as a threat and a danger. C. N. Cochrane, in Christianity and Classical Culture, has given us a remarkable analysis of that debate.

Our purpose here is a humbler one. What were some of the simple, practical arguments against Christianity? On this level, we can see the contrast between Christianity and paganism in a dramatic way.

Perhaps the most offensive aspect of Christianity to the Greco-Roman world was its exclusiveness. The Roman Empire was ready to tolerate any new religion as long as it accepted the supremacy and priority of the Roman state. It regularly gave legal status to one new religion and cult after another, always subject to their acceptance of imperial supremacy and emperor worship. The various religions borrowed at times from each other, but, whatever else was done, Roman supremacy was maintained.

The Christian refusal to mix or unite with other faiths was taken as evidence of their ill will and their dangerous exclusiveness. The Jews previously had been disliked for their religious exclusiveness, but, after the Jewish-Roman War, A.D. 66–70, and the subsequent failure of the Bar Kochba revolt, they were not a significant factor. Moreover, the Christian rejection of compromise was so radical that Rome was concerned with this dissident force in its borders.

Syncretism, the blending of various religions, was a way of life for the Romans. It was held, by men like Aurelius Symmachus, that there are many paths to the gods or God, and various peoples find one or another path most to their tastes and aptitudes. Thus, a variety of ways to God is a stimulus to religion, and it opens the doors to God to more people.

This position was essential to the argument. For the pagans, the way to the gods or God depended on human initiative. Given this fact, different men had varying natures, and a variety of religious choices gave men not only more freedom of choice but also a greater opportunity of finding a way suitable to themselves.

The battle over this point was critical. The Christian rejected all attempts by man to find God. The essence of Christian faith is that God finds wayward, sinful man. Man seeks to flee from God, and it is God who arrests man’s flight, and, by His sovereign grace, redeems him. Quite naturally, some of the earliest Christian apologists stressed predestination, God’s absolute initiative in choosing men.

This was a total rejection of every man-made religion. There were not many roads to God. Rather, there was only one, from God to man, and the name of that route is Jesus Christ, the only way (John 14:6). The pagan plea was for toleration; the Christian insistence was on truth, Jesus Christ. If truth is absolute, then there can be no other way. Error can at times be tolerated, but it cannot be accepted.

Next, Christianity was seen as anti-state. Now the Christians were, as Tertullian and others pointed out, the empire’s most loyal and honest citizens, but they could not worship the emperor. At this point, the debate reversed itself on the matter of tolerance and intolerance. The Christians did not tolerate nor compromise with other gods, religions, or moralities. The Romans did. The Christians, however, while unhappy with a non-Christian state, were obedient to it. But they could only give priority to the triune God. They saw themselves as citizens of the Kingdom of God. They held that Rome was under Christ the King, not the church under Caesar. At this point, Roman intolerance was severe. Every system of life and thought has its areas of intolerance, and, for Rome as for the modern state, the priority of the state is central, and deviations from that are not permitted.

Christianity insisted that for all time, it is the only catholic or universal faith, whereas “eternal Rome” saw itself as the true city of man, and it rejected the ultimacy of God and His Kingdom. In the best sense of the word, both Rome and Christianity were imperial: they had a faith that circumscribed all things. The conflict became
one between the holy faith and the total state.

For the Christians, God and His predestination, not the state, provide order. The state must be instead a minister of God, serving Him (Rom. 13:1ff.). If chance is god, however, then the state must control and predetermine all things. Such a view requires a totalitarian state, then and now. The modern state, like Rome, seeks total control in all spheres. It was not an accident that some of the earliest Christian apologists stressed predestination. Quite logically, too, Cicero stressed the need for the state to use religion to control the people.

No pagan died for religion in Rome. Many died for art. Murders on stage were real, not fictitious. In a play, Death of Hercules, which Tertullian saw, the actor representing Hercules was burned to death as a part of the show. Human sacrifices for the Roman state were numerous, but only Christians died for religion!

There was another area of conflict, sex. The Romans saw sex as essentially related to personal satisfaction, whereas Christians saw it in terms of the family. (Philip Schaff gave ten pages to a sketchy report on the family revolution created by early Christianity.) The Roman poet Ovid, in Michael Grant’s words, “reduced wide areas of human relations to the level of sexual seduction” (Michael Grant, The World of Rome [1960], p. 230).

In our time, we have a similar critique of Christianity by a paganized world. Rome then committed suicide, as the world around us is determined also to do. It becomes urgently necessary for us to stand without compromise for Christ and the faith. The choice is between life and death.