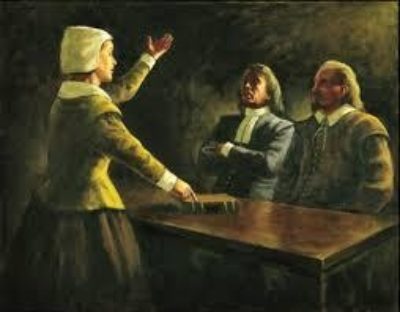 Slander shifts its ground readily, because it is concerned with what will hurt rather than what is true. In different eras, different charges hurt the most. What in one period may be a hurtful accusation may become a compliment in another day.

This was certainly true of Calvin, and of Geneva in Calvin's day and in his time of influence, As Gillian Lewis and Roger Stauffenegger have pointed out, Calvin's Geneva came to be known as "the paradise of women." ("Calvinism in Geneva in the Time of Calvin and of Beza (1545-1605)," in Menna Prestwich, ed.: International Calvinism 1541-171.5, p.49. Oxford, England: Clarendon Press, [1985] 1986.) There were good reasons for this. Calvin was strongly protective of "women's rights." Under his guidance, church consistories went after wife abusers. They prosecuted guardians who had misappropriated trust funds of widows and orphans. Deserted wives were protected, and so on. Prestwich has referred to "the attraction of Calvinism for women in that area. ("Calvinism in France, 1555-1629," in ibid., p. 96.)

In that era, and for centuries before, powerful and prosperous elderly men and women contracted marriages with very young women and men. The families of the young complied with these arrangements for their personal advantages. Calvin felt strongly that such marriages should not be allowed. In January, 1557, the Consistory dissolved a marriage between a woman of "more than 70" with a man of 27 or 28. (Philip E. Hughes, ed: The Register of the Company of Pastors of Geneva in the time of Calvin, p. 321. Grand Rapids, Michigan: Eerdmans, 1966.) Rules were published to protect both men and women in marriage. To avoid deception, many rules were established. Thus, "strangers coming from a distant country" could not be permitted to marry in Geneva until a careful investigation of their past and their family were made. (Hughes, p. 75.) A woman persecuted for her faith could legitimately leave her husband. (Hughes, p. 197.)

It would be an error to say that the pastors of Geneva were always wise in their judgments in cases involving women. What is clear is that Calvinist Geneva was seen in its day as "the paradise of women" because of the receptivity of Calvin and others to their plight and their need for justice. There was a reason for this attitude. It was the revival of the Old Testament as an inseparable part of the Bible; the New Testament was read as an essential part of the old Testament.

Because the Old Testament solidly links holiness with the law, and the law is concerned with everyday life, the result was what Henri Hauser called the "secularization of holiness," i.e., holiness was made a matter of everyday life for all believers. Holiness now was the pursuit of all Christians. It was, in Luthy's words, an "insistence on saintly life as the duty of every believer." (Herbert Luthy, "Variations on a Theme by Max Weber," in Prestwich, p. 381) Calvin said of Luke 6:35, ("But love ye your enemies, and do good, and lend, hoping for nothing again; and your reward shall be great, and ye shall be the children of the Highest for he is kind unto the unthankful and the evil") that it is our duty to do good, expecting nothing;we are to exercise a royal goodness, not a mercenary one, having received grace, we should then manifest grace. (Calvin: Harmony of the Evangelists, I, p. 302f.)

We have a remarkable fact here in Calvin's reformation of Geneva. It was a city rightly called in its day "the paradise of women." This is an aspect of the Reformation which has been given insufficient attention. The reason is that these reforms in civil and church law which made Geneva so remarkable in its day are now associated with patriarchalism, and patriarchy is a hated word to the feminists in both skirts and trousers. It suggests visions of male oppression, domination and rule. It has become a symbol of past and present evils.

The significant fact, however, is that patriarchalism was not male-centered but faith-and family-governed. Modern men in the atomistic family often have more power, if they choose to exercise it, than did patriarchal man. The reason was a very clear one: patriarchal man was a trustee from the past to the future. In I Kings 21, we see that Naboth did not feel that he had the right to sell the family land no matter how much money King Ahab offered. The land was not his except as a trust from his forefathers to the generations yet unborn.

The appeal of existential living is that it limits all right and power to the present moment. Existential man sees no responsibility to the past nor to the future, nor to anything in the moment other than his will and desire. This is why, given any opportunity, existential man is always tyrannical and oppressive: he will do what he can safely do without incurring immediate judgment. Both power and "right" are limited to the moment and to his will. Not so with patriarchal man. He is linked to responsibilities, to the family, and to other people. His wife is his partner and vice-gerunt in responsibilities, and both must be future-oriented.

Feminism, like masculinism, is existentialist and present oriented. It has no sense of community nor the harmony of interests. Both feminists and masculinists believe in a war of the sexes and are out to win in that war. As good Darwinians, they believe in the survival of the fittest in a cosmic war for survival. Since the universe has no law nor morality in their faith, the fittest are simply the survivors, those whose radical ruthlessness and contempt for morality enables them to survive.

To all such people, patriarchy is a trap, because it presupposes, despite the Fall and man's depravity, the ultimacy and triumph of God and His law. The universe is thus a moral universe. As Deborah declares in her song, "The stars in their courses fought against Sisera" (Judges 5:20).

A Biblical, patriarchal culture sees the essential conflict in life as a moral conflict, not a personal one. As a student, I heard a professor, not in favor of patriarchalism, call its central characteristic hospitality, and openness to people. He cited as revelatory of patriarchalism Abraham's response to the three strangers: he invited them in to share his "salt" or life (Genesis 18).

Modern social atomism, however, sees all men as enemies and turns the world into a hostile place. Class is set against class, and race against race. Woodrow Wilson, as a student at Princeton, shared in the hatred of students for town boys, called "snobs" at Princeton, and wrote, "We will have to kill some of those snobs yet before they will learn prudence." (Jonathan Daniels, "Woodrow Wilson's Pious Young," in The New Republic, October 29,1966, p. 28; vol. 155, no. 18.) Wilson, of course, had no such murderous plan, but he liked to think in such terms. Not surprisingly, he helped advance the cause of class conflict. Even as he dreamed of a one world made safe for democracy, he advanced social divisions by his thinking.

Biblical, patriarchal culture is now very much despised by those who, as humanists, hate moral solutions. For them our problems are not to be diagnosed as a rebellion against Christ and God's law but as a matter of economic conflicts, class tensions, and sociological conditionings of a regressive and sociopathic nature. Calvin is for them a symbol of bad answers, and a recent book sees Calvin as essentially a "sick" man! The book tells us more about the author than Calvin.

I have on occasion cited, in speaking, the work of the bishop, St. Charles Borromeo, whose charities included "giving marriage dowries to penniless girls whose fate would otherwise have been the streets," and, in addition to the hostel for the street people of his day, orphanages, a home for reformed prostitutes, and a home for unhappily married women. (Margaret Yeo: Reformer: St. Charles Borromeo, pp. 115, 228f. Milwaukee, Wisconsin: Bruce, 1938.) The reaction is sometimes a cold one. "Social" problems, many hold, should be dealt with by the state, not by "amateurs."

When we depersonalize the problems of men and women, we also depersonalize ourselves. We reduce people to mathematical ciphers whose answers lie in acts of Congress or Parliament. We deny Christianity and Christ in favor of the state and its social workers. Borromeo in Milan and Calvin in Geneva gave us another answer.

But for many today, Geneva could not have been "the paradise of women." After all, Geneva had no Equal Rights Amendment or law! Paul tells us, however, "where the Spirit of the Lord is, there is liberty" (II Cor. 3:17), and it is the Spirit who gave us the law and the gospels. If we do not seek our answers in the Lord and His word, we are a part of the problem. (June, 1988)

(Taken from Roots of Reconstruction, p. 407; Chalcedon Position Paper No. 98)