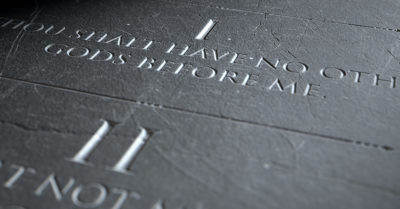 To ask about the place of Biblical law in society can be compared to asking about the place of sun and oxygen in our material life. Such a comparison only dimly approximates the necessity for God’s revealed law in our social order.

The Westminster Shorter Catechism, number 14, tells us, “Sin is any want of conformity unto, or transgression of, the law of God.” This echoes 1 John 3:4, “Whosoever committeth sin transgresseth also the law: for sin is the transgression of the law.” We are also told:

But he that sinneth against me wrongeth his own soul: all they that hate me love death. (Prov. 8:36)

For the wages of sin is death; but the gift of God is eternal life through Christ Jesus our Lord. (Rom. 6:23)

8. For by grace are ye saved through faith; and that not of yourselves: it is the gift of God:

9. Not of works, lest any man should boast.

10. For we are his workmanship, created in Christ Jesus unto good works, which God hath before ordained that we should walk in them. (Eph. 2:8–10)

We are saved by God’s sovereign grace through faith, and we have not been saved to despise His law, His justice or righteousness. Rather, Paul says, God beforehand prepared us and ordained our regeneration: He “created [us] in Christ Jesus for good works.” We crucify Christ afresh when we despise His law.

In Scripture, the word justice is the same in meaning as righteousness. Justice or righteousness is moral order and is a religious fact. Laws express views of justice or moral order and are thus an establishment of religion. Laws do not per se establish a church but rather a religion, and necessarily so. Hence, the only kind of law acceptable from a Biblical perspective is God’s law: “Except the LORD build the house, they labour in vain that build it” (Ps. 127:1).

How does the Lord build His House or Kingdom? We have too long sought to establish God’s law order through the state or the church. Both are necessary but limited spheres under God. Scripture specifically limits their powers. Thus, according to Numbers 18:25–28, the priests, i.e., the sanctuary or the church, received one-tenth of the tithe. Their portion included also their share of some of the sacrifices, but the rest of the tithe went to the Levites, who were, among other things, the instructors of Israel (Deut. 33:10). The ecclesiastical realm was thus barred from becoming a power center. The same was true of the civil government, or the state. It was strictly limited in its powers because its tax was simply half a shekel a year for all males twenty years of age and over. We know from history that the covering (atonement, or protection) tax of Exodus 30:11–16 was the civil tax of Israel, of Judea, and of Jews at least into the Middle Ages.

Church and state were thus severely limited in their scope and power. The law of God is mainly addressed to covenant families, to the people of Israel. God’s Kingdom order has this characteristic:

After those days, saith the LORD, I will put my law in their inward parts, and write it in their hearts; and will be their God, and they shall be my people. (Jer. 31:33)

This means that the central area of action is within the covenant family and its members. The family is the cradle of life, man’s first church, school, government, and vocation. God’s law does not allow us to shift our duties onto the state or to the church. All such evasion of duty is lawlessness, according to Scripture, beginning with the care of one’s parents. Our Lord declares:

6. … Well hath Esaias prophesied of you hypocrites, as it is written, This people honoureth me with their lips, but their heart is far from me.

7. Howbeit in vain do they worship me, teaching for doctrines the commandments of men.

8. For laying aside the commandment of God, ye hold the tradition of men, as the washing of pots and cups: and many other such like things ye do.

9. And he saith unto them, Full well ye reject the commandment of God, that ye may keep your own tradition.

10. For Moses said, Honour thy father and thy mother; and, Whoso curseth father or mother, let him die the death:

11. But ye say, If a man shall say to his father or mother, It is Corban, that is to say, a gift, by whatsoever thou mightest be profited by me; he shall be free.

12. And ye suffer him no more to do ought for his father or his mother;

13. Making the word of God of none effect through your tradition, which ye have delivered: and many such like things do ye. (Mark 7:6–13)

We must remember that, in speaking of tradition, our Lord refers to man-made laws.

The anthropologist Marvin Harris, in Why Nothing Works, The Anthropology of Daily Life (1987), witnesses against his own liberal views as he tells us of the growing breakdown of the modern world. The heart of the problem, he says, is our anti-natalism: we are anti-birth, and hence anti-life. Even those who are against abortion are sometimes marked by a meagerness of life and faith. Children are seen by too many people as a burden, not a blessing, a heritage from the Lord, and his reward (Ps. 127:3). Because of this anti-natalism and our inner meagerness, all the anti-life people, such as homosexuals and abortionists, have come out of the closet, and too many Christians have gone in.

This meagerness of soul has led to a church in retreat, a rapture or escape orientation, and to a general surrender of the world to the devil and his forces.

God’s law is a plan and prescription for dominion in all of life. It is a statement of the means to victory by Christ’s covenant people in their daily lives, in education, the family, the school, the arts and sciences, our vocations, in church, state, and everywhere else, including our health, for we are told that if we hearken to God’s law,

…the LORD will take away from thee all sickness, and will put none of the evil diseases of Egypt, which thou knowest, upon thee; but will lay them upon all them that hate thee. (Deut. 7:15)

The law of God thus is a charter and constitution for a decentralized society in which the basic powers of government are exercised by God’s covenant people in their self-government in every sphere, in their families, their vocations, the tithe agencies they create to minister to a variety of social problems and needs, and so on.

It cannot be stressed too heavily that social financing is a necessity. If God’s covenant people do not provide it, then the state must and will. The present welfare state is in part due to the dereliction of Christians who have withdrawn the faith into the inner life of man. In those cultures where the state does not fund social services, brigandage takes over rapidly as the needy seize what they need: eighteenth-century England, for example, is evidence of this, and the death penalty for as many as two hundred plus offenses could not keep the hungry from stealing.

Wherever the Christian community abandons its necessary task of government and help, other forces take it over. Our Lord teaches us something we often do not choose to remember, that service is power:

25. … Ye know that the princes of the Gentiles exercise dominion over them, and they that are great exercise authority upon them.

26. But it shall not be so among you: but whosoever will be great among you, let him be your minister;

27. And whosoever will be chief among you, let him be your servant:

The word in verse 26 translated as “minister” is diakonos, servant, and in verse 27, “servant” translates doulos, slave, servant. Our Lord is emphatic: service is power, and the Gentiles fail to recognize this and so substitute the exercise of brute force for service. Today, however, the ungodly have borrowed from the church things the church often forgets, namely, that service is power. Hence, the modern state has created an unprecedented form of power by taking over the church’s diaconal services. Rome provided bread and circuses to keep the mob from revolting. The modern state sees its social services as a means of creating a new paradise on earth, the Great Community or Society. The fallacy of its plan is that it cannot with all its money make a new creation out of sinful man: the state only aggravates and enhances man’s sin by teaching him that it is the environment, not man, which is fallen and sinful.

The Christian must recognize that: first, man must be born again, and that there is no other way than Jesus Christ into God’s Kingdom (John 3:3). Second, the living act. William Booth accused the churches of mummifying their converts, of producing mummy Christians who sat in the pew and whose action was little more than a meager reaching for one’s wallet. When the Bible summons us to hear the word of the Lord, the word hear has the force of both hearing and obeying, of acting on God’s orders.

Every word of Scripture is God’s law. Because our Lord is God, and there is none other, every word of Scripture is a binding word, a command word, that requires us to hear and obey. We dare not reduce the faith to pious gush, nor worship to an aesthetic experience. The purpose of the church’s services is not an impressive musical or liturgical treat but to provide marching orders to the soldiers of Christ.

To the law and to the testimony: if they speak not according to this word, it is because there is no light in them. (Isa. 8:20)

Taken from In His Service: The Christian Calling To Charity by R. J. Rushdoony.

Book
In His Service: The Christian Calling to Charity
External Link