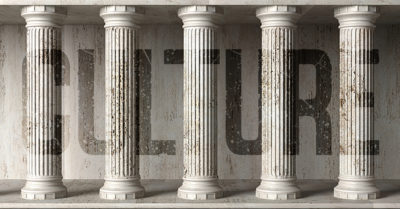 In 1954, Bernard Baruch found the modern mentality increasingly evidencing fears concerning the future. “Everywhere we look we find further evidences of this dread of breakdown.” 1 No era lacks its fears and problems, but, when the fears of an age outweigh its hopes and confidence, then that culture is in process of disintegration.

Every culture is a religion externalized, a faith incarnated into life and action. The mainspring of every culture is its basic faith, its religious beliefs which undergird its hopes, action, and perspective. When that faith begins to decay, the culture decays.

We were saved with this hope ahead. Now when an object of hope is seen, there is no further need to hope. Who ever hopes for what he sees already? But if we hope for something that we do not see, we wait for it patiently (Rom. 8:24-25, Moffatt translation).

But we wait patiently for our hope only as long as we have faith in that hope. When the faith perishes, the hope is gone.

This makes clear the nature of the growing internal crisis within the Soviet Union, among the Communist elite. Both Communist students and leaders are losing hope because they are disillusioned with Marxism. The 1969 defection of one of the most prominent writers of the Soviet Union gave evidence of this. Anatoly Kuznetsov left the Soviet Union, his mother, son, and wife, as well as a position of affluence and prominence, to seek asylum in England. To indicate the meaning of this step to him, he took a new name, A. Anatol, to signify a new life. In his public statement, he declared:

You will say it’s hard to understand. Why should a writer whose books have sold millions of copies, and who is extremely popular and well-off in his own country, suddenly decide not to return to that country, which, moreover, he loves?

The loss of hope: I simply cannot live there any longer. This feeling is something stronger than me. I just can’t go on living there. If I were now to find myself again in the Soviet Union, I should go out of my mind.... So long as I was young, I went on hoping for something.... Finally, I have simply given up.... I came to the point where I could no longer write, no longer sleep, no longer breathe. 2

The mood of flight is a major one; no sane man wants to remain in a burning building. As a result, many Americans and Europeans also look for a country to run to: Canada, Australia, New Zealand, South Africa, all these and more are cited, but all prove to be a part of the same general conflagration.

It is not surprising that the moon-flight of 1969 commanded so wide and popular an attention. Many of the remarks made were revealing: “No life there, but no riots either!”

This general disillusionment is caused by the failure of the age to sustain man spiritually. The faith of the modern age is humanism, a religious belief in the sufficiency of man as his own lord, his own source of law, his own savior. Instead of God and His law-word as the measure of all things, humanism has made man the measure of reality.

Humanism has had a measure of success because it preempted Christian civilization; it captured an existing culture and claimed the fruits thereof as its own. In terms of orthodox Christianity, man is under God’s law, and man’s only true liberty is under God’s law. For humanism, man is not under law but over or beyond law as his own source of law. Liberty in humanistic terms is from law, in particular, in deliverance from God’s law. As a result, humanism rapidly erodes a culture as the implications of humanism develop and come to maturity. Humanism calls for perpetual revolution, because, with every man his own law, and with evolution producing new heights each generation, freedom from the past is a necessity. But this perpetual revolution is the deliberate destruction of the capital of a civilization, and its consequence is the ultimate impoverishment of all.

“A faith for men to live by” is the necessity and need of every race and nation. This faith must give meaning to man’s life, to his past, present, and future. Man requires a world of total meaning, and humanism, as it comes to flower, gives instead a world of total meaninglessness. Orthodox Christianity, with its faith in the triune God and His sovereign predestinating decree, alone gives that total meaning.

The church can depart from that faith only at the risk of its life.

If a religion is isolated from its world and is confined to its church or temple, it is irrelevant to that world because it is not its motive force. The religion of a culture is that motive force which governs human action in every realm and embodies itself in the life, institutions, hopes, and dreams of a society.

Christianity has ceased to be the motive force of society. Not only has Christianity been opposed by humanism, but also, from within its ranks, false eschatologies — premillenialism and amillenialism — have led to a retreat from the world and a denial of victory therein. This is a surrender of culture to the enemy.

However, if the religion of a culture cannot maintain order in the institutions of its societies, then that religion is finished. The established or accepted religious faith of a society must undergird it with the necessary social order to make progress and communication possible. Modern culture, however, is seeing the radical erosion of church, state, school, family, and all things else, so that very obviously the humanistic faith of modernity is ceasing to provide a workable faith for society. Thus, in this day and age, Christianity, the older religion of the West, is irrelevant, and humanism, the present faith, is collapsing rapidly. Humanism in its every form — Marxist, Fabian, democratic, republican, monarchist, or otherwise — is in radical decay and unable to further a culture. Christianity, in its biblical declaration a world religion calling for world dominion in terms of Jesus Christ, is now unwilling to think in terms of dominion. Schilder has called attention to those Christians who, to use Vriend’s summary of Schilder, believe that they have no higher task than to eat the crumbs that fall from the cultural tables of the unregenerate. 3 Crumb-pickers are content to let the devil attempt to establish a culture but refuse to believe that God requires it of His people. The stern warning of one prominent clergyman against all attempts at establishing Christian reform leading to a Christian culture is this: “You don’t polish brass on a sinking ship!” If, indeed, the world is a sinking ship, then all brass-polishing is futile. But if the world is destined to fulfil all the prophecies of Isaiah, and of all Scripture, and culminate in a glorious peace (Isa. 2:4) and a joyful reign of Christian law and order, then crumb-pickers are opposing Jesus Christ.

Culture has been defined very simply as “the way of life of a society.” When that way of life sees life as meaningless, then society either stagnates and declines, or it collapses. To see life as meaningless is to make death your “way of life.” Oriental societies adopted philosophies of world and life negation; they declared that nothingness and meaninglessness are ultimate. The consequence for them was stagnation and ultimate conquest by the West, first by Islamic forces, then by Christian powers. The luxury of stagnation is now gone; history’s more rapid pace brings swifter judgment to those who fail. As a result, when the culture, the way of life of a society, is unable to provide either order or meaning to life, its destiny is death.

Facing, thus, the end of an age, particularly one which deserves to die, the Christian must again reassert Christianity as a total way of life. This means that the Christian and the churches are derelict in their duty if they do not rethink every field of life, thought, and action in terms of Scripture. Christian schools are an excellent beginning, but no area of thought can be permitted to remain outside of the dominion of Christ. To the extent to which the churches and Christians pursue a crumb-picking operation rather than an exercise of dominion, to that extent the world will flounder in its own decay and ruin before renewal comes.

Henry Van Til has given an able statement of Schilder’s view of Christ as the key to culture:

Since the Christian is one who partakes of the anointing of Christ (Heidelberg Catechism, Lord’s Day 12), his concern with culture is inescapable. For, by his anointing Christ was declared the legitimate heir of the first Adam and commissioned as God’s officer of the day to do the work which our first father failed to perform, namely, to glorify God in his handiwork. But Christ was not only empowered, he was also enabled by the Spirit. His anointing was the guarantee of achievement, for he came to reconcile all things to the Father (Col. 1:20). As such Christ does not bring something altogether new, but he restores what was from the beginning, and actually brings to pass what God designed from the first. Adam as a living soul was indeed the father of human society, but Christ is the life-giving spirit, who calls men into his fellowship and fashioned them for the fulfillment of the obligation given at creation to the first Adam. The latter must be seen primarily as image-bearer and consequently office-bearer of God, a servant-son who as prophet, priest and king received the cultural mandate to cultivate the ground, to replenish the earth and have dominion over it. This was for man the service of God, true religion. This was the original cosmic order, in which the idea of vocation, of being commissioned and called was determinative for the nature of culture.

But man rebelled and denied his relationship to the Father, becoming an ally of God’s enemy, the Devil. As part of the created world of nature man had both consciousness and conscience, was both letter and reader (interpreter) in God’s book. He was called to cultivate the good earth and to bring to expression what was implicit, to fruition what was latent, and thus to be a co-worker with God, the creator. For although God pronounced his creation good, it was not a finished product; there was to be an evolution and a development abetted by the cultural activity of man. And only thus the sabbath of God’s eternal rest would be ushered in. 4

Until there is Christian reconstruction, there will continue to be radical decline and decay.

Book
One and the Many, The: Studies in the Philosophy of Order and Ultimacy
External Link