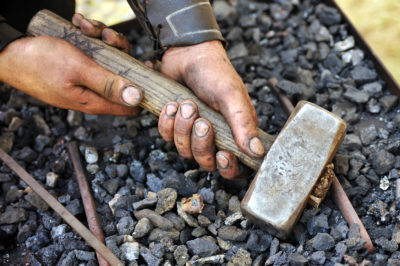 Much of the Old Testament consists of historical accounts. For most of that 3600-year time span, God was silent, and all the faithful experienced was the day-to-day life of work, responsibility, and toil, in addition to the challenge of maintaining their faith amongst pagans without and, frequently, apostates within the nation.

We falsely assume their life was peppered by miracles that made faith unnecessary, but the miracles were relatively rare, often seen only by a few, and grouped into a few years (largely those of the Exodus/wilderness and Elijah/Elisha eras).

Far from being a succession of miracles, the history of God’s people is one of the very normal challenges brought about by either their sin or that of their enemies. There was no “golden era” in either the old covenant or the new. Our joy in the Lord can be very real, but it is often tempered by the day-to-day circumstances of serious problems, persecutions, and, sometimes, defeat and frustration.

Old Testament history is, therefore, not too different from our own. The survival of the covenant people was often in doubt, their nation was frequently at risk from either internal or external enemies until, on more than one occasion, there was no help save in the hand of God.

The same trend has been evident in the new covenant, though to a lesser extent. The new model that supplants the Hebrew nation is the Kingdom of God, the Davidic King of which is Jesus Christ (2 Sam. 7:12–13; 22:51; Matt. 1:1; Luke. 1:32–33). The congregation, or assembly, of people is now the ecclesia. There is, therefore, a very real correlation between the work, problems, and struggles of the people of God in the old and new covenants.

There have been times when men have seen events as a potential “tipping point” in the history of something larger than themselves, whether their culture, a cause, or civilization itself. They see a need to “dig in” and either defend and nurture what is good or defeat what is sinister.

Nehemiah and his contemporaries faced what they saw as such a tipping point in the history of the Jews in the fifth century B.C. It had been over 150 years since Jerusalem had been destroyed by the Babylonians and the Jews deported hundreds of miles away to Babylon. It had been over eighty years since a remnant had returned as promised, and just over sixty since that generation had rebuilt the temple. Nehemiah requested, and was granted, permission by the Persian emperor to return to Jerusalem and rebuild its walls and homes. To this point the walls and city had remained as the Babylonians had left it, in ruins.

Moreover, the cause of Nehemiah’s request to the emperor was the persecution of the Jews (Neh. 1:2–3). Josephus, who wrote 500 years later, described attacks whereby some were “led away captive” (plausible from Neh. 5:8) and others were killed, their corpses found by the roads the next morning.1 Nehemiah set about to do an emergency work to create a place of safety for the covenant people. The non-Jewish inhabitants of the land had lived there for about two centuries (having been moved there by the same policy of the old Assyrian empire that had removed the ten tribes). They included Samaritans and others, even Arabs (Neh. 2:10; 4:1–8). They were possessive of Judea and wanted the Jews to fail (Neh. 2:10; 4:8; 6:1–2).

Nehemiah, however, had authority from the emperor as governor over Jerusalem and the Jews. This did not stop an attempt by the non-Jews to form a coalition to attack them, a move they apparently would themselves justify as an emergency move to put down what they claimed was a rebellion (Neh. 2:19).

The building of the walls of Jerusalem was needed to stop the predations. As they began to work on the walls, the threat became an outright armed raid (Neh. 4:11). The cooperation of the people, even those of outlying towns, is evidence of the urgency of the situation. A dozen or so years earlier, mixed marriages with these foreigners had threatened religious assimilation, and Ezra had ended them (Ezra 9–10). Now the danger was physical annihilation. The Jews saw their crisis as a “tipping point.”

Within a walled city, the people could go about their business with a unity of purpose. The lack of walls, however, made them easy prey so that their covenant life was a perilous one. The goal was the growth and prosperity of the Jews and the walls of Jerusalem were the means.

The people responded with a willingness to work. Each family was assigned a section of wall close to their homes. The third chapter of Nehemiah memorializes their names to inspire faithfulness in future generations. Work crews from Jericho built a gate on the north wall. Future inhabitants of Jericho who traveled to Jerusalem would enter through that gate. A man named Baruck is noted for “earnestly” repairing his section.

Of particular note is the fact that the priests were the first to volunteer (Neh. 3:1). Their work in the temple was a holy one, set apart, consecrated, or sanctified to God. But here, they build the walls which defended God’s people and “sanctified it.” Sanctifying their work and its result was not a casual or flippant act. It meant they saw the hard, physical work of building the wall as a holy one in the service of God and His people.

The challenge of the Jews in Nehemiah’s day to rebuild Jerusalem is analogous to all efforts to serve God. The walls we build serve to protect the Kingdom of God and its citizens against the hostile threats of its enemies. We have a great work before us, one that seems larger than our resources. We are often challenged, and the opposition barely disguises a hatred and contempt. One of the taunts of Nehemiah’s day was, “Will they sacrifice?” (Neh. 4:2), sarcastically claiming that not even the favor of Jehovah could help them.

The Jews of Nehemiah’s day had to divert manpower in order to guard against surprise attack (Neh. 4:11–21). We must also protect the people of God from predators. We do so by homeschooling, by separating from wolves in disguise, and from worldliness and humanism in their every manifestation (1 Thess. 5:22). Like Ezra (and later both Nehemiah and Malachi) we forbid marriages outside the faith. Like the Jews, we protect ourselves in order that we can progress in the work of God’s Kingdom. Our enemies, likewise, do not want to see our work succeed and will use every means possible to suppress us, including legal action (the Samaritan governor Sanballat spearheaded the opposition against the Jews) or even violence.

Like the Jews encamped around the ruins of the City of David, our first work is that which is closest to home; we do the work that God has put within our reach. We build as families, in terms of our place and callings. We are not lone wolves, atomistic, retreatist, or subsistence minded. We are dominion oriented. We build, and the more we build, the more intense our opposition will become (Neh. 4:7). It is no accident that the enemies of Christianity are on the rise and their opposition more virulent. Humanism’s failures are apparent and Christian countermeasures are seen as a threat to its hegemony.

As the priests sanctified their work on the walls of Jerusalem, we should also see our labors in the difficult work of reconstruction as consecrated to God. So, we remember those whose work in the Kingdom has helped enable our own; we recall their names as did Nehemiah in chapter three.

Building the walls was a defensive move to protect the people of God, but it led to the eventual expansion of the nation. Likewise, our defense must not be a social or cultural retreat, but a digging-in that declares, “We will not yield.” We defend ourselves, as Nehemiah did, in the awareness that our goal is not survival, but the growth of the Kingdom of God and His Christ. Their work went on in perilous times, as must ours. We are on the side of Jesus, and therefore the victorious side in time and eternity.

Taken from the July 2019 print edition of Arise & Build. Subscribe today to have this newsletter mailed to your home!