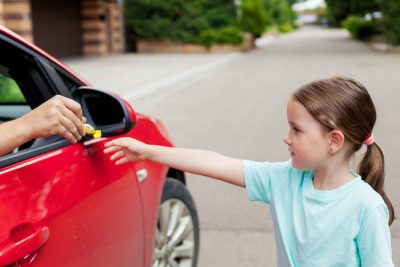 When I was about four years old, a handsome older man stopped to smile at me, pat me on the head, and tell me what a fine boy I was. I learned from the remarks of my elders that he was a “bad man.” Some years later, as I purchased stamps at a post office window, the man behind me patted Mark, then about three, and told him what a fine boy he was. I turned and recognized the reputed head of that north county criminal syndicate, Al Capone’s brother-in-law.

One of our persistent problems is our inability to recognize and cope with evil. It so often wears a smiling face. The devil does not wear horns; he looks like a good and helpful friend. In fact, the devil is the original public-relations man, using words not to express the truth but to provide a false front.

The devil appears in history as a helpful friend of man, ready to call attention to God’s shortcomings and to help man realize himself. Shortly after World War II, one humanistic intellectual, a member of a fashion­able church, wrote of Christianity’s wonderful dream of a new creation, which sadly, had “failed.” The City of God was for him a failed dream. He offered a better one, less parochial and more inclusive, the City of Man. The United Nations he saw as the great step towards this new and true Eden. He used Biblical terminology to present an anti-Christian hope, and he did it with much pride, hope, and self-righteousness.

Not long after that, a Catholic layman who tried to break the power of our north county racketeer wound up in prison; the key testimony against him came from the racketeer! He found quickly that ungodly judges are not fond of justice: it threatens them.

Paul tells us in Romans 6:23, “The wages of sin is death.” What this means is that people earn hell; they work for it, sacrifice for it, and get the payoff they have labored for all their days, plus separation from God. There are no evangelists in hell, none to nag anyone about their ways, only the payoff of a hard life in the service of evil. (The world and the nations are working hard to earn hell.)

Here, however, evil has a smiling face. It claims concern, as did the tempter in Eden, over man’s welfare. It summons us to work together for a better world (in terms of man’s laws, not God’s). It is idealistic and speaks much of peace, brotherhood, and love.

Next to the devil, who in the temptation of our Lord was full of pity for the poor (“Turn these stones into bread”), God looks hard-hearted, and Jesus Christ appears indifferent to the “real problems of mankind.” Over the years, many “scholars” have called attention to Paul’s supposed arrogance and bad disposition. What people then disliked (and still do) in Paul was his habit of being absolutely truthful. As Paul asked the fool­ish Galatians, “Am I therefore become your enemy, because I tell you the truth?” (Gal. 4:16).

We have a problem today, because the smiling face of evil is preferred to the voice of St. Paul. Kindness and smiles have a very important place in life, but not as a mask for evil. Pulpits are regularly filled with good public relations men who can smooth the ruffled brows of evildoers and make them feel good. As in Isaiah’s day, the churches are full of people who say in effect, “Prophesy not unto us right things, speak unto us smooth things, prophesy deceits” (Isa. 30:10). The road to hell is not only paved with good intentions but good words, smiling faces, and high ide­als. God’s reality is not a public relations ploy, nor a media event. It is life in Christ and in terms of His law-word.