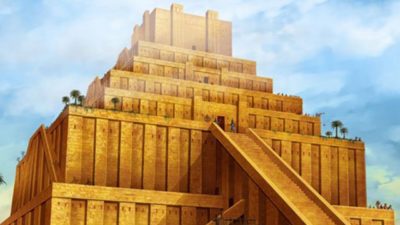 The judgment on the Tower of Babel builders should concern us all, because it is a continuing judgment on all their imitators. The Tower represented a one-world governmental center in defiance of God. Its purpose was to undo God’s judgment and to restore paradise by man’s ostensibly sovereign acts.

God’s judgment on Babel was preceded by His commentary on that endeavor. First, God noted their unity in sin: “the people is one, and they have all one language” (Gen. 11:6). They were at work in unity to defy God. In Sumerian, the Tower is called Etemenanki, “House of the foundation of heaven and earth.” Man hoped to bind all historical determination to himself, to assume control in effect of heaven and earth.1

Second, God said, “this they begin to do: and now nothing will be restrained from them, which they have imagined to do” (Gen. 11:6). Their plan is the control of the world by man, man as lord over man in a unified one-world order. Such an order would rivet man into slavery to man, God’s purpose is the shaking of men and nations (Heb. 12:18-29). The world is therefore founded upon the seas and established upon the floods to prevent us from gaining a security in our sin (Ps. 24:2).

Third, we are told that “the LORD came down to see the city and the tower”, and God declares, “Go to, let us go down” (Gen. 11:5,7). These idioms have reference to judicial action: God “comes down” as judge to render a decision. We speak of a parent “coming down” on a child in punishment. The usage here is similar: it has reference to taking action.

Fourth, God’s judgment was confusion. Man’s work and language were confounded and confused; men were scattered over the face of the earth by the internal dissension God’s judgment created. The word confound is in the Hebrew balal, to mix or mingle. God confounded man in his sin, and God continues to do so. In Babylonian, Babel means the “gate of god”, but in Hebrew it came to mean confusion.

Fifth, the purpose of the confounding or confusion was and is to prevent men from attaining success in their defiance of God. It was preventive action to check the power of man’s sin and to enable the godly to realize their calling. After the confounding of Babel, we are given a genealogy which leads us directly to God’s covenant man, Abraham.

Let us look again at the work involved in building the Tower of Babel. It was a major task and involved no small amount of labor. Before the Flood, cities were commonplace, but Babel was different in that it represented no normal urban development but a planned operation to create a world center. It was thus not productive work. It produced neither food, house, nor manufactured goods. Its purpose was to defy God by preventive planning against God’s judgment and law, and it would also supplant God’s government of man and the earth by man’s government and law.

The Tower of Babel was destroyed by God’s judgment, but the motivation of its builders still remains and is as active as ever. An obvious evidence of this is modern statism, as is also the United Nations. There are, however, many more illustrations of this.

Thirty years ago, as the new pastor of a church, I ended the every-member canvassing of members to finance the church. I did so because I believed that the motivation for giving should be a willing heart, and I quietly worked towards stressing tithing. The result was that the giving increased substantially. At the same time, denominational opposition to this was marked, as well as the outright hostility of some of the elders. The important thing, it was held by these men, was not so much the results, i.e., the income or giving, but the method. Indeed, some insisted on believing that the Spirit worked best with the method.

The reasons were obvious. Those churchmen involved in the every-member visitation work were of two kinds. Some found it difficult or embarrassing to pressure members to give more. Others enjoyed doing so. It gave them an opportunity to badger people sanctimoniously, give them feelings of guilt and inadequacy, and to do so with a self-righteous glow. It was the exercise of power which appealed to them.

To me, the whole system was a trust in man’s way rather than in God’s law and the work of the Holy Spirit. There was in all the promotional work of the every-member canvas a large amount of useless and ungodly work.

The two are essentially the same. Ungodly work is useless work, and vice versa. Consider the very considerable internecine conflict in many organizations, institutions, and corporations. Such conflict is productive of nothing except more conflict. It represents a power play, a Tower of Babel syndrome, seeking a top which “may reach unto heaven” (Gen. 11:4), or, as Cassuto rendered it, “with its top in the heavens.”2 At the very least, this means the Tower was built to glorify man, to create an imposing and impressive center. Davidson’s comment is to the point: “Man unites in the anthem ‘Glory to man in the highest’ and the outcome is division and confusion.” However, even as man glorifies himself, he is fearful of God. “In the fear which prompts this action or we shall be dispersed all over the earth (verse 4) there is symbolized man’s feverish search for security apart from God, a search doomed to failure.”3

The production which marked Babel was useless; it had no place in God’s purposes and was thus given over to confounding and confusion. All work apart from God is similarly judged.

The Tower was a fiat effort. It was an attempt by man to play god, and all activity outside of God’s dominion. We are then attempting to evade the world of God’s law. The politics, economics, religions, and sciences of our time are dedicated to man’s fiat will. They are all thus examples of the Babel mentality. The work Babel created led only to disaster. The work created by contemporary politico-economic activities is similarly doomed. The loans to the many incompetent regimes to continue their incompetence, the world-wide fiat money inflation, and the increasingly controlled work in every sector of life are all disaster-bound. Revelation 13:17 tells us of the goal of this humanistic effort: “that no man might buy or sell, save he that had the mark or the name of the beast, or the number of his name.” For predestination by God, the new Babel, Babylon the Great (Rev. 17:5), substitutes predestination by the humanistic state. Whereas under God’s predestination, our “labour is not in vain in the Lord” (I Cor. 15:58), in the state’s predestination it is always vain.

Obadiah 1:15 declares, “For the day of the LORD is near upon all the heathen: as thou hast done, it shall be done unto thee: thy reward shall return upon thine own head”, a fact stressed also in Lamentations 1:22 and Jeremiah 50:29. Confusion is the destiny of godless work. All that it amasses will in the end serve God’s Kingdom and peoples. In Isaiah’s vision,

1. Arise, shine: for thy light is come, and the glory of the LORD is risen upon thee.
2. For, behold, the darkness shall cover the earth, and gross darkness the people: but the LORD shall arise upon thee, and his glory shall be seen upon thee.
3. And the Gentiles shall come to thy light, and kings to the brightness of thy rising.
4. Lift up thine eyes round about, and see: all they gather themselves together, they come to thee: thy sons shall come from far, and thy daughters shall be nursed at thy side...
9. Surely the isles shall wait for me, and the ships of Tarshish first, to bring thy sons from far, their silver and their gold with them, unto the name of the LORD thy God, and to the Holy One of Israel, because he hath glorified thee. (Isa. 60:1-4, 9)

The whole world shall serve Christ’s Kingdom and His people, because only their work has the foundation which endures. In the parable of the two foundations (Matt. 7:24-29), our Lord makes clear that no life nor work can endure apart from Himself as the foundation.