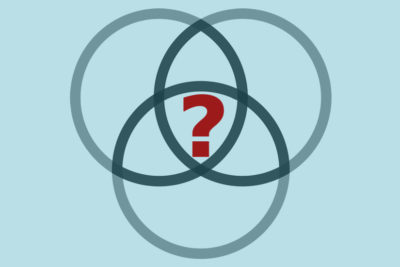 Failure to recognize the importance of these two aspects of God’s being has led again and again to serious problems in the church, and to decline.

We can better understand this problem with a very simple illustration. Assume for a moment that you are a very wealthy person. People will then show a great deal of interest in you, in what they can get out of you, and in how they can use you. Their concern with you is in the economical you, in your relationship to them, and in what they can get out of you. Their relationship with you at first may be a good one, but, in time, as they fail to grow, and as they are disinterested in you except in the ways you can help them, the relationship will cool.

So it is with Christians and with churches. Repeatedly in history, there have been major revivals, times of growth and expansion, and then a steady and sometimes sharp decline. Christians have come into these re­newal years with excitement and joy. Like a burst of light, these times and movements have been exhilarating in their immediate effect. They have been like glorious dawns, but they seem all too soon to turn grey and dark.

The reason for this, whether a medieval movement, a Wesleyan re­vival, or the current charismatic movement, has been to a considerable degree the same. The glorious experience of the power of God in one’s life, or the life of the church, is experience centered, self-centered; it is a healthy joy in what God has done for us, but it is not followed by a greater joy in knowing God as He is.

Over the years, I have had various persons call on me to “straighten” me out for Jesus. When I have inquired about their knowledge of the whole Word of God, they have become impatient: they know Jesus, and they do not need to know Moses, Jeremiah, or anyone else! Not surpris­ingly, such people often fall by the wayside. They can tell you, in their time of fervency, what Jesus did for them, but, beyond that, their interest is dim. They are religious pragmatists: what works for me? What can Jesus do for me? To try to talk to them about the economical and the ontological approaches to God, using the simplest of language, is futile. They damn such thinking as head knowledge when all one needs is heart knowledge. They wrongly identify faith with a glow, not with total com­mitment, service, and knowledge.

The life of faith requires the economical aspect; it is receiving from God and rejoicing in His gifts. Because we are creatures, this is a neces­sary aspect of our lives. It is, however, not enough. To receive the gifts while remaining unconcerned with knowing the Giver is morally wrong. We need to know God in the totality of His Word, and to enjoy Him fully in all His works and being. It is the ontological Trinity which is the metaphysical basis of the economical Trinity.

There is urgency here. The church has gone over to a “practical” min­istry. It stresses psychology, services to the young, to couples, to senior citizens, and so on. Its preaching is tailored to gaining interest on a su­perficial level, not to solid, doctrinal teachings. Because sin is unpopular, it talks about codependency, victimhood, and other like psychological garbage. The greatest preachers of the centuries would today bore most congregations because their preaching was centered on the triune God, not on the people and their “needs.” The modern church has forgot­ten that the greatest true need of people is to know God, and too much preaching is about what God can do for you. Whether the church be Catholic or Protestant, charismatic or non-charismatic, the emphasis is too often humanistic; it is on emotions, feelings, and, above all, benefits.

I am not calling for pulpit lectures on the economical and ontological approaches to the doctrine of the Trinity, but, rather, teaching, preach­ing, and writing that centers our faith on the triune God, not on our­selves. The practical trinity of too many people is Me, Myself, and I.

The ontological Trinity is a mystery, beyond the comprehension of men. All the same, this ontological Trinity reveals Himself truly in His holy Word, and He requires us to know Him. When God gives His gifts, it is that then “ye shall know that I am the Lord your God” (Exod. 16:12).

Is it not blasphemy to believe that God’s only purpose in our salvation is to make us happy, to give us a glorious glow, and to take away our problems? If someone is interested in you only in terms of what they can get from you, will you not in time be thoroughly angry with them? True enough, God does not need your interest in Him, nor your time, nor your money, but will He not despise your profession of faith when it proves to be no more than a sanctimonious self-interest?

We have too many happy-happy Christians who do not fear God, and they should. The adoration of God is gone in too many churches. Too many despise God’s law-word and still expect His blessings. The results are all around us, a numerically strong church and a weak people and witness.