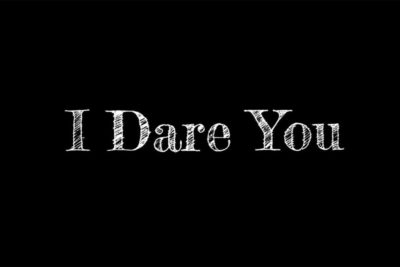 At each of the six celebrations of Chalcedon’s fiftieth anniversary this year, I have issued a series of dares to the attendees. These were designed to focus attention on extending and elaborating upon what has already been achieved in the course of the first fifty years of Chalcedon’s ministry. The following summarizes the essence of these twelve dares as delivered verbally in my presentations.

Chalcedon is controversial. “He that is upright in the way is abomination to the wicked” (Prov. 29:27). Consequently, our enemies demand to know, “How dare Chalcedon do this or that?” In response to that challenge, we answer our opponents as to how and what we dare. In fact, we issue the following dares to encourage all to become bold in the faith and to stand for Jesus Christ without compromise.

Dare to be comprehensive. The effect of sin is extensive. “Even the plowing of the wicked is sin” (Prov. 21:4). Therefore God’s commandment is exceeding broad (Ps. 119:96b): it covers everything, everywhere, for all time. R. J. Rushdoony’s The Roots of Reconstruction covers 430 topics in a tour de force of application, showing the way. But “the work is very great and large, and we are few and far apart along the wall” (Neh. 4:19), which means we must avoid rabbit holes that misdirect our efforts while working faithfully to leave the godless with no excuse.

Dare to be guiltless. Paul said he was guiltless of the blood of all men, because he did not shun to proclaim the whole counsel of God (Acts 20:27). Do you want to be guiltless? Proclaim the entirety of God’s Word. Failure to warn the world is tantamount to hatred of the world (Lev. 19:17). Being guiltless entails being comprehensive.

Dare to be great in the Kingdom of God. We live in an era that esteems the marvelous things of God’s law to be a strange thing (Hos. 8:12), and men, even in the nation’s pulpits, routinely call us to be least in the Kingdom of Heaven. Those who would be great must teach and do even the least of God’s commandments (Matt. 5:19), but those who loosen His commandments are least in His Kingdom. Being great entails being comprehensive! The least commandment (Deut. 22:6-7), as reckoned by the Hebrews, includes the same promise as the Fifth Commandment to honor father and mother! Loosening His commandments involves one in “stealing God’s words” from His people (Jer. 23:30), preventing the people from hearkening to God and turning from their ways (Jer. 23:22). Those who were least in His Kingdom, who loosened God’s commandments, conducted blackouts of Rushdoony’s works—but the truth could not be contained by the men opposing it.

Dare to promote the true mainstream. Christian reconstructionists are thought to be on the fringe of society, to be out of the mainstream. But the true, original mainstream is declared in Eccl. 7:29: “God made man upright, but he has sought out many devices.” The true mainstream is rectitude: uprightness. Sin and death are the abnormalities, the deviations from normal. Don’t fear to say so.

Dare to work against darkness. Darkness has been losing the battle since St. John declared that it is in actual process of passing away (I John 2:8). Darkness is easy to detect: “To the law and the testimony: if they do not speak according to these, it is because there is no light in them” (Is. 8:20). Speak according to the law and the testimony: there is light in these things that challenges the darkness in men’s hearts.

Dare to plant more and pull fewer weeds.Weed pulling can itself become a rabbit hole that dominates one’s horizon. But pulling weeds doesn’t deliver a verdant, fertile harvest. Only planting and cultivating seeds will do this. Expunging evil is not a substitute for establishing godliness. Plant good plants and they’ll drive out the weeds for you.

Dare to focus on the next generation. Be generous with your time with young people, as Dr. Rushdoony himself was.

Dare to be a stepping stone. The world doesn’t terminate upon you as its center. You may not get to see the results of your labors here and now, but if your labor is in the Lord, your children’s children will eat of the fruits of your faithfulness today.

Dare to promote justice. There are few things scripturally more important than justice. Deut. 16:20 affirms, “Justice, justice shalt thou do,” while Christ leads “justice to victory” (Matt. 12:20). We need to get with the program!

Dare to trust God, not man. Trusting men triggers a curse (Jer. 17:5), a curse upon all who trust in man and make flesh their arm. God tells us to “cease from man, whose breath is in his nostrils” (Isa. 2:22). If we don’t follow through here, men will become big while God shrinks in our lives.

Dare to start small.One of Dr. Rushdoony’s greatest messages is titled First the Blade, based on the principle of slow organic growth taught by our Lord in Mark 4:28. By the same token, Zech. 4:10 commands us not to despise the day of small things. Why? The text itself answers this question: because the seven eyes of God are upon the tin stone on a string being used as a plumb line to make sure God’s work was being built straight. If God’s entire attention is upon a cheap tin rock on a string, then He is in the work being undertaken for His Name’s sake. He is intimately involved and deeply interested in all labor that seeks to make crooked things straight, no matter how modest their beginnings may be.

Chalcedon itself started very small, publishing (without debt) its founder’s books, a third of which still hadn’t seen print when R. J. Rushdoony was called home to the Father. But soon Chalcedon will transition from publishing Rushdoony to extending Rushdoony. It took fifty years before McVicar’s book about Rushdoony and reconstruction appeared—but now it is here, because the importance of the foundations laid over time are making themselves felt.

Dare to be formidable. Lip service to the faith never made anyone formidable. Rushdoony was formidable because (1) he pressed the crown rights of Christ and (2) because he submitted every thought to Him. The legacy he left behind in the homeschooling arena alone illustrates the power of sanctified Christian scholarship when men consecrate their efforts to their King. It is an example worth emulating, for we will all be held accountable for the talents graciously delivered to our care by the Savior of the world.