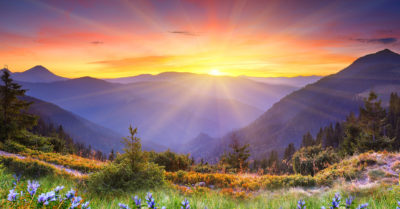 Sin makes man seek autonomy, or self-rule. God’s ultimacy is offensive to men who themselves seek to be autonomous. Man likes to make God his adjunct, to make God dependent on man and on time and history. Fallen man wants to bring all of eternity within the scope of time and history, and hence his control. Man hates the idea of God’s sovereignty, predestination, and providence.

Man often does this while trying to hold to a formal Christian orthodoxy. Thus, Christ has constantly been made into a god after man’s own image, even in the name of Christianity. Jesus is presented as the innocent babe, the suffering servant, the teacher, the example (What Would Jesus Do?), or some aspect of His incarnation that depreciates His role as part of the Trinity. A formal Christianity can be maintained while limiting Jesus to the confines of time and human history. Jesus in such theology is limited to what He does for man.

We need to see the Triune God as ultimate. We cannot have Jesus, the second person of the Trinity, apart from the Trinity itself. God is more than His grace to man; His purpose is greater than the benefit man derives from it. Christ came to save men from their sin in order to restore them to an eternity of life and service to their Creator.

All creation is God’s. This includes all history and time, which includes our personal lives and times. Neither our lives and times nor those of all time and history are ultimate. They are real, but not ultimate.

Eternity is not a concept. God is eternal, and we cannot escape the relation of God and eternity. The eternal is not an idea but a person, and we are His created beings. We ought not to think of God as being before time, as that limits Him in relationship to time. God is before time and history because He is preeminent over them as the Creator of the universe and its time limitation.

Because God is not subject to time, we cannot use logic to understand Him. Logic is a progression of thought that man uses because of the finitude of his mind. Logic is a sequence of steps to reach a conclusion. Man uses logic because his mind and his knowledge are limited. We cannot theorize such a chronological thought process in God. Man thinks; God knows and determines because He is infinite and eternal. He is not merely wise; He is Wisdom. God does not possess truth; He is Truth.

Modernist theology often seeks the hope of Christianity while maintaining the mythology of humanism. To the extent humanism emphasizes God, it does so not to bring man to God but to bring God to man. Modernism seeks to make God a resource for fallen man, a representative of divine presence, and a source of possibility.

Ultimacy must come from beyond man, not from him or from time or history. There is a reason why Scripture begins with the creation of all things by God and ends with Christ in heaven having judged the world. It means that all the universe derives its meaning and purpose from Him. Without such a meaning man has often tried to counterfeit his own. Man thus creates his own mythologies. Darwin created a mythology of origins, Freud a mythology of anthropology, and Marx a mythology of historical process. When man denies the ultimacy of God and His predestination, he ends up fabricating his own. Darwin saw ultimacy in matter and the biological process; Freud saw it in man’s early history; and Marx saw it in historical process and revolution.

Man’s attempts to create meaning all end up in disaster because they are a rebellion against the meaning of time and history given in Scripture. The ultimacy of God and His Word give meaning to man, time, and all of history.