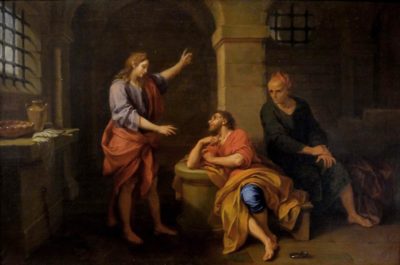 The story of Joseph is one of the most moving accounts in all of history. He went from the status of the favored son to that of a slave, to that of prime minister of all Egypt. In between, he was ten years in prison for a crime he did not commit (Gen. 39:7–20, 41:1). There is no record that his false imprisonment conviction was ever reversed; Pharaoh was interested in what Joseph could do for Egypt, not in Joseph’s past.

This is a familiar story. So many wrongs and evils done to us and to others go unrighted in history. Our Lord requires us to devote ourselves to His service, not to our vindication. In the end, He, as the great Judge of all men and nations, will right every wrong and close all books with justice.

This is a fact of faith we need to recognize. I know a very able and remarkably talented man who was deeply wronged and financially destroyed about fifteen years ago. The worst part of it all is that he has allowed it to destroy him; he goes over the matter hundreds of times with anyone near him, and he now has no friends. With his abilities, he could have in the past fifteen years easily rebuilt his fortune and gone further. Instead, he has chosen to brood on what happened. I understand his wife supports them now.

Our Lord tells us, “Sufficient unto the day is the evil thereof” (Matt. 6:34). In this fallen world, there are enough evils in the past, and more than enough in the future, to shatter any man’s peace of mind. Instead of concerning ourselves with such things, we must do our duty to God and man, cope with today’s evils, and trust in God’s ultimate and unswerving justice.

The man I mentioned has had a super abundance of problems. But so too has a woman I know, poor, aging, and alone, yet she bubbles over with happiness, serenity, and good humor. The difference between the two is faith. Her griefs are far greater, and they continue, but in the face of them her faith grows. Of her it can truly be said, in Nehemiah’s words, “[T]he joy of the LORD is your strength” (Neh. 8:10).