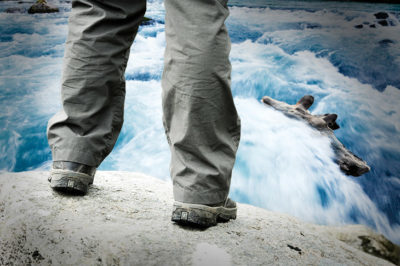 I believe it was my first sermon after ordination. It was at a lovely moun­tain town, and the congregation was interested. Happiest of all for me was the pleasure of a newly converted member, an artist. He gave me a small oil painting which I long enjoyed, until, in a move, it was lost.

I preached on Matthew 7:24–29, the two foundations. If our lives had a false foundation, times of judgment would shatter us and sweep us away, whereas, if our lives are established on Christ the Rock, we would withstand such storms and triumph.

A month later, an angry letter came from the artist. I had beguiled and tricked him in an “optimistic” view when all good Bible scholars said the rapture and Last Judgment were very close. This was half a century ago.

Our correspondence brought out his sharp complaint. If my interpre­tation were correct, then, instead of simply waiting quietly, like the wise virgins, until the Lord came, we would have to be working!

I cited many texts to him, including our Lord’s words, “Occupy till I come” (Luke 19:13), but he ended the exchange by accusing me of buying into the social gospel.

Is it any wonder that, in the half a century since then, the church, then still America’s most powerful voice, has become irrelevant? The world is not to blame for this. The church did it to itself. I believe that the Lord will hold this to the church’s account.

Our Lord is as He has been since His resurrection, “the blessed and only Potentate, the King of kings, and Lord of lords” (1 Tim. 6:15). The word potentate is dunastes, the only authority, the only power. “All things were made by him; and without him was not anything made that was made” (John 1:3). My Bible has no appendix informing me of this King’s abdication! His plan remains the same: before the end comes, He shall put down all rule, all authority, and all power. All His enemies shall be put under His feet (1 Cor. 15:23–26). To believe anything less is not to believe in Him. “This is the victory that overcometh the world, even our faith” (1 John 5:4).

Think about it. What does God want His church to be? An army of losers?