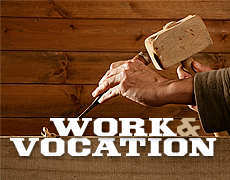 The word vocation comes from the Latin and means in origin a bidding or a calling; to a remarkable degree, the word has retained its original meaning. Words, like other things, commonly erode or alter their meanings. The Christian doctrine of every man's vocation or calling came into its own with the Reformation, although not without some preparation for it in the medieval era.

The doctrine of vocation or calling gained currency as men began to take time and history seriously. If the goal of the Christian life is a neoplatonic flight from this world, then pietism has effectively undermined the doctrine of non-ecclesiastical callings. To speak of having a calling is usually to speak of the clergy and clerical office.

However, some non-Christian cultures have sought to take time and history seriously, as witness humanism today, without having any sense of a calling. The missing factor is taking God even more seriously. Without the sovereignty of God to undergird and ensure the validity and efficacy of a calling, man works in a void, a vast, meaningless emptiness. He floats aimlessly in inner space. Where men believe in the triune God and take time and history seriously as the arena of God's Kingdom work, they can then both work and rest with confidence and peace. Where God is man's Lord and man's ultimate and essential environment, then man is responsible and effective in his actions. Where, however, man is without God, his environment becomes a hostile and determinative force, and man is stripped of responsibility. For the godly man, because God is the Lord and the determiner, man is not under the control of his physical environment, and time becomes the partner and aide to eternity. Man then knows he is not alone in what he does, and more is involved in his actions than himself. At a critical point, man then rests and works in God in the confidence of God's efficacious actions (Rom. 8:28). Luther once said:

Give men time. I took three years of constant study, reflection, and discussion to arrive where I now am, and can the common man, untutored in such matters, be expected to move the same distance in three months? Do not suppose that abuses are eliminated by destroying the object which is abused. Men can go wrong with wine and women. Shall we then prohibit wine and abolish women? The sun, the moon, and stars have been worshiped. Shall we then pluck them out of the sky? Such haste and violence betray a lack of confidence in God. See how much he has been able to accomplish through me, though I did no more than pray and preach. The Word did it all. Had I wished I might have started a conflagration at Worms. But while I sat still and drank beer with Philip and Amsdorf, God dealt the papacy a mighty blow.1

Note Luther's comment: "Do not suppose that abuses are eliminated by destroying the object which is abused. Men can go wrong with wine and women. Shall we then prohibit wine and abolish women?" The answer is that, in a godless universe, the total conflict of interests prevails, not a harmony of interests. In such a conflict cosmos, the goal becomes total war against the supposed source of trouble. Hence, class warfare, racial conflict, and generational tensions become commonplace. A man's vocation then becomes the obliteration or the eradication of supposed sources of trouble. This means total war against the capitalists or the communists, or against some particular race. Evil then becomes a metaphysical principle, some segment of being, rather than a moral fact, what men do with themselves. The consequences for work are very great.

We have seen that a vocation is a calling. The Reformation stressed work under God as a calling or vocation. Since then, however, the meaning of calling or vocation has tended to be restricted. Men think of a vocation as something professional and a calling as religious and ecclesiastical. On the other hand, work has a different kind of origin. It comes from the Anglo-Saxon wore, and it refers to the exertion of strength to do something. Work is akin to the Greek ergon, work; to erdein, to do, sacrifice; and to orgia, secret rites. As a result, because work has reference to physical labor, work has become separated from vocation or calling, a very unbiblical consequence. It must be stressed, therefore, that for us work must be a vocation or calling under God.

Not only work but life apart from God is meaningless. Work then becomes a question of survival economics, gaining enough food and shelter to live. For all too many people in history, work has had this connotation. Its goal has been survival, and hence it has had a sad and burdensome aura. Escape from work is then a much desired goal.

However, in the Bible work is eschatological in meaning. It has a goal, the Kingdom of God. Work can be drudgery, a necessary means of survival, or work can be a means of dominion and subduing the earth (Gen. 1:26-28). Work can be a means of maintaining life and no more, or work can be the means of creating the future. Work thus can be done simply to maintain the status quo, or it can be the means of determining our tomorrows. Where work is eschatologically governed by the dominion mandate, it is constructive of things present and future. The modern era has seen the flourishing and decline of the idea of progress, but progress is simply the secular face of Biblical eschatology. The doctrine of progress sees "history" moving onward and upward, and its tenets are secularized versions of the post-millennial faith. Without a faith in God, the idea of progress soon withers; all activity in a void ends up a void.

5. They that sow in tears shall reap in joy.
6. He that goeth forth and weepeth, bearing precious seed, shall doubtless come again with rejoicing, bring his sheaves with him.

Both passages use a common farming fact symbolically. Solomon's sentence has reference to ‘sowing' rice; the rice is in effect thrown upon the waters, thrown away. Necessary food is thus cast upon the waters, but only so can it produce more food in due time.

Psalm 126:5-6 refers to famine conditions. To take from the remaining store of grain what may be necessary for survival, and to go forth and sow it, means to trust that the orderly processes of God's creation will multiply that grain into a rich harvest.

Both texts make symbolic and eschatological use of the fact of sowing. They tell us that, in God's creation, such work is productive and it leads to a multiplication of our resources. Work thus is the key to increase, godly work done in the faith that the Lord of the harvest will give us rejoicing and many sheaves. This multiplication is a necessary aspect of dominion. The commandment to Noah was, "Be fruitful, and multiply, and replenish the earth" (Gen. 9:1). The Biblical references to work are eschatological; they have in view the determination of the future.

For many, however, work should be primarily to preserve the status quo. We have some who idealize the old village life, whether of Europe, Africa, or Asia, because of its "stability." They seem to believe that progress should be limited to the elite. Others seek a return to and maintenance of some past order, as though the end of history occurred somewhere in the middle. (To appreciate the attainments of a previous era is commendable only if we see them as a foundation for the future.)

Work only comes into its own when it is eschatological. To build a house, plant a tree, and till a garden has a future orientation. The world was not empty when we came into it, and it must not be more empty for our coming. We work to establish God's ordained future, His Kingdom. Where work is systematically eschatological, it is also blessed. Work must always have a purpose greater than ourselves.