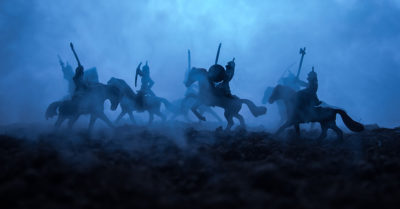 Although done without publicity and fanfare, a war against Biblical faith is under way all over the world, in varying degrees. The civil governments are in the main in the hands of humanists, whose passionate hatred of Christianity is intense.

This, however, is a disguised war. The Soviet Union, as a leader in the humanistic vanguard, began its history with a brutal and open assault on Christianity. Later, for strategic reasons, this gave way to another approach, attack by indirection, a method adopted from Nazi and Swedish practices. The Soviet constitution guaranteed freedom of religion to allay fears and criticisms, but it made this “freedom” totally subject to licensure, permits, regulations, controls, etc. In other words, the state supposedly granted a right while at the same time ensuring that it would be nonexistent. In practice, thus, there is no freedom of religion in the Soviet Union.

In the United States, there is a concerted effort to accomplish the same goal by the same means. The First Amendment guarantees freedom of religion. While the United States has no church establishment, Christianity has been from the earliest days the religious establishment, i.e., the determiner of law and morality in the United States. But, as John W. Whitehead points out in The Separation Illusion: A Lawyer Examines the First Amendment (Milford, MI: Mott Media), the U.S. Supreme Court decided by 1952 that “God was dead, and His church was dead.” The remaining task was to dismantle the church and Christianity and to make way for the new established religion, humanism. Now that war against Biblical faith, designed to control, dismantle, and eliminate it, is under way.

It is a well-planned war. When virtually all fifty states embark on a common program, in unison, and appear with federal directives in hand, it is no accident. Of course, they declare themselves innocent of any attempt to control a Christian school, church, missions agency, or organization, but this is the practical results of their requirements. These efforts are directed at present mainly against small or independent groups, those least able to defend themselves. Meanwhile, major church groups are not disturbed or upset. Legal precedents established against these smaller groups can later be applied against all others.

These demands take a multitude of forms: attempts to control church nurseries, the various religious uses of church buildings, zoning regulations, etc. Christian schools are told that they must pay unemployment compensation, seek accreditation by the state, use state textbooks, teach humanism, and so on. Catholic orders and Protestant missionary agencies are told that they must pay unemployment compensation also. The National Labor Relations Board seeks to unionize parochial and Christian school teachers, and so on and on. Now, too, there is a demand that Christian schools be integrated at a percentage set by the Internal Revenue Service, this despite the fact that such schools have not been involved in segregation. In another case, a church is being taken to court for firing a homosexual organist. In one way or another, all are being told that they must wear the mark of the beast (Rev. 13:16–18).

Fighting this battle is not easy nor cheap. The great pioneer and leader, whose victories in the Yoder and Whisner cases represent legal landmarks, has been and is Attorney William B. Ball, of Ball and Skelly. Mr. Ball is active in a number of cases currently, and during the summer of 1978, for example, was involved in cases in Kentucky and North Carolina. Attorney David Gibbs has formed the Christian Law Association (Cleveland, OH) and is also actively involved in cases in many states. The C.L.A. Defender is a magazine which reports on some of these cases and is available to supporters of the C.L.A. But all these men cannot continue without support. They are working long hours, and often sacrificially. Numerous new cases are arising weekly. Attorney John Whitehead of the C.L.A estimates that in a very few years, perhaps two or three, $500,000 monthly will be required to fight these cases!

The price of resistance is high, not only in money, effort, and abuse, but in many other ways. One pastor, facing the possibility of jail, spoke of the very real threat of gang rape by homosexual prisoners who looked forward to assaulting a preacher. It also means the animosity of the compromising churchmen whose conscience disturbs them and who therefore lash out against the courageous men who make a stand. I know that, when I support any who resist, I am usually given “friendly” warnings by these compromisers that it would be inadvisable for a man of my stature to associate with such men, and I have no doubt that these resisting Christians are warned against associating with the likes of R. J. Rushdoony!

One reason for the intensity of the battle is this: the growth of the Christian school movement is far greater than most people realize. If it continues at its present rate, the humanists fear that, by the end of this century (not too far away), the United States will have a radically different population, one made up of faithful and zealous Christians. Humanism will then perish. Moreover, the birthrate for humanists has been low for some years now, and the birthrate for various minority groups, even with the “benefits” of welfarism, is beginning to drop markedly from its earlier high ratio. But the people involved in the Christian school movement have a high birthrate. The Christian schools are producing the better scholars, who are going to be the leaders twenty and forty years from now. This is for them a threat, and a crisis situation.

But this is not all. Humanism is failing all over the world. The politics of humanism is the politics of disaster. Because humanism is failing, it is all the more ready to attack and suppress every threat to its power. The issue is clear enough: humanism and Christianity cannot coexist. Theirs is a life and death struggle. Unfortunately, too few churchmen will even admit the fact of the battle.

The battle is more than political or legal: it is theological. The issue is lordship: who is the Lord, Christ or the state, Christ or Caesar? It is thus a repetition of an age-old battle which began, in the Christian era, between the church and Rome. Lord means sovereign, God, absolute property owner. For us, “Jesus Christ is Lord” (Phil. 2:11): this was the original confession of faith and the baptismal confession of the Christian church. Now, too often, the confession, whatever its wording, seems to be a pledge of allegiance to a church or denomination, not to the sovereign Lord, Jesus Christ. Thus, our great need is to confess Jesus Christ as Lord, our Lord and Savior, Lord over the church, state, school, family, the arts and sciences, and all things else. If we deny Him as Lord, He will deny us. “Whosoever therefore shall confess me before men, him will I confess also before my Father which is in heaven. But whosoever shall deny me before men, him will I also deny before my Father which is in heaven” (Matt. 10:32–33). To confess means to acknowledge and to be in covenant with, to stand for in a position of testing or trial. The question thus is, will the church of the twentieth century confess Jesus Christ? Will it be His church, or the state’s church? And whom will you and I confess?

The issue is lordship. Because we are not our own, but have been bought with a price of Christ’s blood, we must serve, obey, and glorify God in all our being and our actions (1 Cor. 6:20). We cannot live for ourselves: we are God’s property, and we must be used by Him and for His Kingdom. All too many churchmen are like the likeable and earnest young man, very active in a sound church, who insisted that he was “entitled” to enjoy life. A powerboat and waterskiing were his goals, and, in view of his support of, and faithfulness to the church, he felt “entitled” to enjoy these in due time without having his conscience troubled by the Christian school battles, and tales of persecutions at home and abroad. In brief, he wanted Christ as Savior but not as Lord. He wanted Christ to provide fire and life insurance, so that he could live his life in peace. But if Jesus is not our Lord, He is not our Savior. If we are not His property and possession, He is not our shield and defender (Ps. 5:12; 59:9, 16; etc.).

The philosopher Hegel, the spiritual father of Marx, John Dewey, and almost all modern humanists, saw the state as god walking on earth. The humanist is a very dedicated and religious man: he cannot be countered by lukewarmness. (Our Lord’s indictment of the lukewarm is especially severe in Revelation 3:14–16.) The humanist’s church, his lord and savior, is the state. The salvation of man requires that all things be brought under the lordship of the state. Hence, the current moves against churches, Christian schools, and Christian organizations is a religious move, designed to further the humanistic salvation of man and society.

Because these attacks on Christianity are religiously motivated and are religiously grounded, they cannot be met by merely defensive action, or simply by legal action, although defensive legal action is urgently necessary. Our Lord is greater than Caesar: He is King of kings, Lord of lords (Rev. 19:16), and the Creator and Governor of all things visible and invisible (Col. 1:16). We must take the offensive as His ambassadors, His army, and His bringers of great and glorious tidings of salvation, to bring every area of life and thought into captivity to Christ the Lord. Of Christ’s victory, and of the defeat of His enemies, there can be no question. What is at issue is which camp we will be in.

We are at war, and there are no neutrals in this struggle. The roots of humanism are in the tempter’s program of Genesis 3:1–5, man as his own god, knowing or determining good and evil for himself. Those who claim, in the name of a false and Neoplatonic spirituality, that they want to rise “above” the battle, are also trying to rise above Christ and the meaning of His incarnation. To stand for the Lord is somehow unspiritual and unloving in their eyes. They are like the fourteenth-century monks of Athos, who “rose above” the problems of their day and found spiritual ecstasy and visions of God in contemplating their navels. When Barlaam condemned this practice, these loving, spiritual, navel-watchers arose in a fury (of love, no doubt), called a synod, and cited and condemned Barlaam and his party as heretics! So much for being loving and spiritual! We still have, in other forms, our navel-contemplators all around us, very much around us, but not with us. All well and good: let us donate them to the enemy. “If God be for us, who can be against us?” (Rom. 8:31).