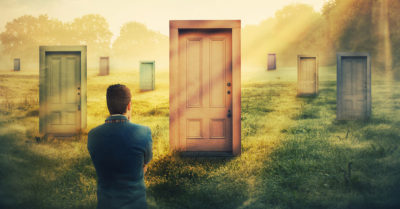 My father often used the term “future-oriented” to describe what he saw as the necessary mindset of the believer. He believed in working in terms of faith in the certain advance of the Kingdom of God.

My father’s postmillennialism was the eschatology behind his future-oriented thinking. He saw pessimistic theology completely dominate Christianity after the establishment of the state of Israel in 1948. The belief that the imminent return of Jesus would result in His miraculous initiation of the “millennial” reign paralyzed Christians’ understanding of their responsibilities for generations, a condition from which the church has still not recovered.

One of the most famous ministers of the twentieth century began a work that was notably successful and influential. His vision of it extended far into the future. His forward-thinking vision was so inconsistent with his doom-and-gloom “don’t polish brass on a sinking ship” eschatology that something had to give. A man who worked with him told me he stopped preaching about eschatology. He did not repudiate his eschatology (or he would lose his financial base) but he went silent on what he must have realized was a perspective counterproductive to the success of his ministry.

Twentieth-century Christianity was dominated by an eschatology that saw miraculous events ending the current age and beginning a new one. Planning for a future in the present age was, at best, a waste of time and, at worst, a rejection of what was believed were the certain promises of God. The emphasis was on the present, getting as many as possible “saved” before the rapture. That emphasis on the present led to a neglect of Kingdom work that produced a future in which we now find ourselves.

As bad as neglecting the future to live in the present is viewing the future in terms of a return to the past. This is often a problem with those who believe they are future-oriented; they seek the future by returning to the past. This is perhaps more debilitating than a present orientation. We cannot see the future, so we tend to look nostalgically at some past period and desire its revival. Christians tend to idealize some previous time because they associate it (correctly or incorrectly) with better times. Various periods are seen as a model: the post-Pentecost church in Jerusalem, the “early church” in general, the Reformation, later Puritanism, some period of American history, agrarian society, and so on.

When the first Jews returned from the Babylonian Captivity to rebuild the temple, they quickly progressed to laying its foundation, but then a sense of discouragement set in. It was small, and it was not going to be the showplace Solomon’s temple had been. God’s message through Zerubbabel was, “For who hath despised the day of small things?” (Zech. 4:10). They could not have Solomon’s wonder back again, but they did have the privilege of making progress as a covenant people, an honor for which names are recorded in the book of Ezra. The future would come by tackling the hard work ahead, not by looking at the past.

What Future Do We Seek?

When I was young, we would visit my widowed grandmother in Kingsburg, California, which had a sizable population of Armenians, most of whose families had immigrated between the 1890s and the aftermath of World War I. There was an elderly Armenian woman who would walk to the market past my grandmother’s bungalow who often stopped to talk to Grandma in Armenian. She spoke no English; she had never learned the language and was now increasingly isolated. She had lived in the past and never invested in the future.

What kind of future do you envision? Is it merely a nostalgic return to something in the past that appears to have qualities you desire? Perhaps I should take that question a step further. What sort of world do you envision when the fullness of the Kingdom of God is approached?

When the dynamic structures and forces of our culture are controlled by forces unfriendly to Christian faith, there is a tendency to retreat to those areas they have abandoned, to claim the ghettos as our own. Rather, we should see all that the ungodly build as the eventual inheritance of the Kingdom.

Christians should embrace the forward movement of history even while acknowledging its failures and shortcomings. The term reconstruction, which we use as an analogy for the Christian’s duty, was never meant to imply that total demolition was always, or even usually, necessary. If that was the case, then we would be little more than anarchistic revolutionaries. Whatever man builds that cannot be shaken will remain and be part of the Kingdom (Heb. 12:27).

The Path to the Future

Look at the technological progress that has occurred in your lifetime. I believe the future holds more such development, and I believe this will be part of the maturing Kingdom of God. The future Kingdom will be a complex culture, one with technologies that are beyond our imaginations. These advances will revolutionize science, medicine, transportation, and more. In one area alone, a breakthrough could transform world economies, offset the damage done by inflation and debt, and open entirely new realms of advances—energy. Over forty years ago I recall an industrialist describing his confidence in the free market. He said someday automobiles would be sold with a lifetime of fuel built into them, not because he knew how, but because men, left free, would continue to innovate.

Progress only comes by moving forward, so our perspective should be oriented towards the future and our (admittedly small) role in it. There is no value in being tied to the past, which is, at best, only instructive, and never a blueprint. The future will not be found by retracing our steps; we will not return on the road on which we came.

Like an eschatology that waits for God to miraculously fix everything, a mindset that is past bound avoids the problems in the world. Being future-oriented means we have a mindset that envisions the overcoming of evil by the advancing Kingdom. After all, no group of men could have been more discouraged at the evil around them and the implausibility of advancing the Kingdom than the apostles after the ascension of Jesus. They had to preach the message of a Jew, killed by His own people, to non-Jews. They preached the Kingdom of Heaven at the peak of the Roman Empire’s strength. It was a seemingly hopeless task, but one that was empowered at Pentecost by the Holy Spirit, and so guaranteed success.

God has given us an outline of the future, though not its details. His Kingdom will advance and cover the earth as the waters cover the sea. That process is being powered by the Holy Spirit. He overcomes and we are overcomers as the citizen-laborers in the Kingdom He advances.

We cannot put history on rewind, nor should we want to as we would only revive the errors of the past and end up where we are today. We envision a future when every knee is bowed and every tongue confessing Jesus is Lord; we work, through the enabling of the Spirit, to erect a future on a new foundation. We don’t try to go back to any past. If the present is failing, it means a pioneering work will have some effect, at best a probing towards the next step forward, one productive of a more blessed future. There will be missteps and miscalculations along the way, but that does not mean such steps are fruitless. The heyday of the Christian day school was brief. Most such schools have since closed because they were hurriedly developed on the public-school model which was subsidized and hence economically difficult to maintain. The failure of those efforts was not a defeat, but a steppingstone, and Christian education itself is alive and well. Homeschooling has expanded and built on the foundation of the early day schools, and there are likely many changes ahead. Lives have been changed, families solidified in covenant awareness, and Christian communities edified by a maturity they lacked a half-century ago, all successes, evidence of progress. Hard work is not, by definition, easy. Sometimes progress is hard to discern when you have yet to crest the hill and see a new horizon.

Like the minister I mentioned, many churches have quietly stopped emphasizing the eschatology they once made prominent, often to the exclusion of all else. Even the abandonment of error is progress. Defeatist eschatology is quietly being given a back seat in many churches. The eschatology has, because of its own date-setting, been embarrassed too often. No new eschatology has been adopted, interestingly. Those churches are lacking in vision and are ripe for a new eschatology that will transform their thinking and action. Hopefully, what replaces the old will have a future-oriented perspective, one that develops a new generation of believers to plow through our troubles because God’s future for His Kingdom is a glorious one, and our halting efforts in terms of its certainty in the timing and power of the Spirit are sure to be blessed.

Taken from the November 2019 issue of our bi-monthly Arise & Build printed newsletter. Receive your subscription to this newsletter along with our bi-monthly Chalcedon Report all for just $20/year. Click now to subscribe.