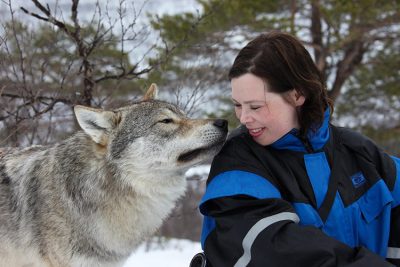 While at the University of Colorado recently, I picked up a copy of the independent Colorado Daily because a front-page article caught my eye. Its title is one which reflects a now common opinion: “The wolf: a victim of bad publicity.” More than a few naturalists assure us that the wolf does not attack human beings, and they cite their work with wolves as an example. (Of course, they work with well-fed wolves.) A few days previously, I had finished reading a very interesting family history of Michael Charnofsky, Jewish Life in the Ukraine: A Family Saga (1965). The book describes an experience, on a cold night, driving home with horses and sleigh, of an attack by a wolf pack; escape came at the price of tossing overboard, one by one, the load of prepared geese for Passover.

Again, the October 10, 1979, Time reported on a book by anthropolo­gist William Arens, The Man-Eating Myth, which states that cannibal­ism may never have existed anywhere as a regular custom. Of course, many explorers and missionaries have given eyewitness accounts of can­nibalism as a regular practice, but they were not anthropologists! The October 1979 American History Illustrated carries a letter of August 5, 1782, by Louisa Cheval, describing her experience with Indians, canni­bals, in Spanish Louisiana. The poor woman lacked the insight of mod­ern anthropologists and thus, did not assess her experience properly!

Why such skepticism about well-documented events and practices? Some years ago, one man, an anthropologist, remarked by way of rebuke to me for an observation I made, that all our records of past human ex­periences are distorted and false. The reason for this, he held, is that so much of all our historical data came to us through the filter of religion. Christianity in particular, he said, has distorted all data by seeing man in terms of “the myth” of the fall, and Calvinism especially, with its doc­trine of total depravity, has led to falsification of all records concerning man. The great task of “science” in the next generation, he held, would be to undo that false picture of man and history, and especially of “primi­tive” man and nature.

Well, the revisionism is now under way, and wolves are very dear, lov­ing creatures; cannibals are really vegetarians; and criminals are really abused and misunderstood peoples, hurt and in need of love! The law still believes in punishment, but now it seeks to punish Christian schools, godly men, Christian families, and the like. A new doctrine of man is the presupposition of our laws now, and nothing is more reprehensible to the new lawmaker than Christianity.

It is not surprising that a growing but largely unpublicized problem in the national parks and forests of the American West is the attack on and maiming of human beings by animals. A generation reared to think of bears as sweet, cuddly animals acts with a foolishness around bears (and other animals) which makes it very susceptible to serious injury. (On top of all this, we have evidences of a vocal minority who are ready to defend the rattlesnake, but not, of course, these horrid Christians!) A generation brought up on television cartoons in which animals are fine, sensitive souls has little sense of reality. It leads to the kind of insanity which led an army officer to express shock to a rancher who spoke of shooting and poisoning squirrels and other varmints. What kind of an army can we have, when an officer bleeds for a rodent pest? And what kind of laws and society can we have when men hold such opinions?

The answer is that we will have the kind of society we are steadily getting, from San Francisco to New York, and around the world. Man’s vision of life is a false, distorted one, and, “Where there is no vision, the people perish: but he that keepeth the law (of God), happy is he” (Prov. 29:18). A man’s ways are now right in his own eyes, and men insist that man’s will must replace God’s law. Nothing is sacred, and everything is permitted, in this new faith (which is like the faith of the Assassins of old). Reality now comes, for more and more people, from drugs, hashish, marijuana, opium, heroin, and the like, all of which are used to blot out God’s world and “free” man’s mind to remake reality in the dreams of drugs.

But the issue is not drugs: it is false religion. Humanism requires a drug culture. A world under God’s law does not need it. Which world do you live in?