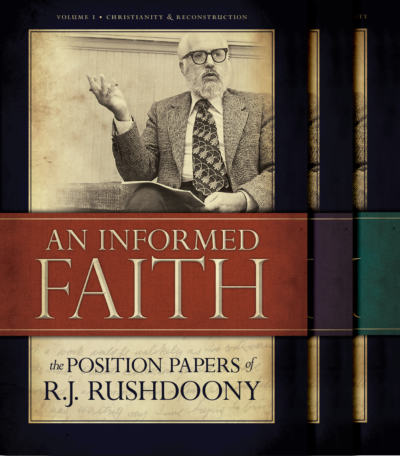 Our faith should be an informed one because the God who created all things speaks to every sphere of life, and all facts should be studied in light of the revelation of God in Scripture. This is the foundation of Christian dominion.

For R. J. Rushdoony, true government was the self-government of the Christian life in terms of God's law, so he wrote his position papers to better equip Christians to apply their faith to all of life. His objective was not to empower the state, or the organized church, but rather to call every person and institution to God's Word, which often put him at odds with both church and state.

This three-volume collection of his position papers (1979-2000) are organized topically and are featured for the first time with an extensive index which will make this material far more accessible to the studious reader.

This beautiful three-volume collection of hardback books topically organizes ALL of Rushdoony's position papers (not only the 115 originally published in Roots of Reconstruction, but also 118 later essays, including six recently discovered unpublished papers).