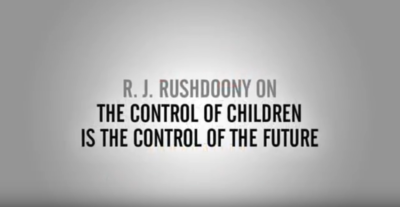 What are the basic powers in any society?  It’s important for you to know this because the enemy knows it and has it in mind in all his thinking and planning.  The first and foremost power in any society is the control of children, because the control of children is the control of the future.  This is why socialism always aims, first and foremost, to control the child.  This is why, when the humanists first began their work in the United States, they aimed through Horace Mann, James G. Carter, Charles G. Sumner, and that whole motley crew of Unitarians --humanists to the core -- to take over, through the state, control of the schools of this country, because they felt that there was no hope for humanism unless it could command the children.

Control of children is control of the future.  It’s that simple.  The state knows it.  The humanists know it.  The Marxists know it.  The Fabian-Socialists know it.  The Fascists know it; and it’s time we, as Christians, knew it.  Consider how grievous our Lord regards it if anyone offend against a child.  He says it is better if a millstone were hung about his neck and he were dropped into the deepest sea.

Control of children is the basic power in any society, and hence it is that in every age the enemies of God had worked to control children.  What a fearful sin it is in the sight of Almighty God for a parent to turn his child over to the enemy, to give his child to an institution that bypasses the word of God, to an institution that believes that God is irrelevant to life.  It is time we began telling parents who call themselves Christians and who put their children into humanistic schools how seriously offensive they are to God.