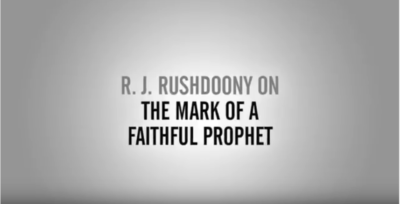 Jesus is supremely thus the prophet. All prophecy is summed up in Him. But all prophets are to be judged by the requirements that the law here sets forth. The word of the covenant God will only come from covenant prophets, and will be in agreement with all points of the covenant law. The covenant prophet will speak the faithful word. The false prophets will speaks words not from God. God declares through Moses all false prophets will speak an uncommanded word, their own word, not the word of God. The command word of God can only be preached. The command word of God is His whole word from cover to cover; it is the law and the prophets, the Gospels and Revelation.

The prophets therefore declare: “Hear ye the Word of the Lord.” The false prophets, God declares through Moses, shall die. God will bring the judgement upon them. The work of a prophet is to speak for God. Now to speak for God has a twofold aspect. First, it is to speak or preach or teach faithfully the Word of God, the Covenant word, the Law-word of God. God’s Word is grace; it is covenant; it is law, all at one and the same time. False prophets deny the law, they deny the word, and therefore they deny the grace. They substitute another word.

Again and again, the Bible describes serving other Gods as obeying their law. To go after other God’s meant to desert God and His covenant and law. Moses repeatedly declared that this was the meaning for apostasy: to go after other God’s and to serve them, that is to obey the law of other gods. Now if we obey the law of the state when it contradicts the covenant of our God, we are going after and serving other gods. Thus, the first mark of a prophet is one who teaches and declares the Word that God has commanded. The false prophet may be outwardly faithful to the covenant word and law, but he may prophesy falsely. Or, second, the false prophet may be faithless to the Word of God, but he may predict accurately. Both constitute a false prophet.

A true prophet is both faithful to the covenant word or law, and he predicts truly in terms of that law. Now I have already cited an example of the first kind, Hananiah. Hananiah was a man who outwardly was a faithful preacher of the Word, but in a time of great adversity he wanted to give God’s people an encouraging word. When instead he should have said unto them: “Your sins -- I have come to judge you.” Hananiah chose therefore to be a popular, an encouraging preacher, to have a positive word at all times. He believed in the power of positive preaching. He was, therefore, a false prophet. It is not just the ability to predict, nor merely preaching the Word faithfully, but it is the ability to preach God’s word faithfully that marked the prophet.

In Jesus Christ the great prophet, we are all called to be priests, kings, and prophets. To be faithful to the whole word of God as prophecy, as law, and as grace. To teach it as a command word, not to allow our word and our hopes to interfere with that sure Word. Moreover, we are to prophesy, to predict in terms of God’s law-word. Romans 6:23 declares: “For the wages of sin is death, but the gift of God is eternal life through Jesus Christ our Lord.” We have, also, such as Deuteronomy 28 which declares what happens when men believe and obey God, and what happens when men refuse to believe, and when they persist in disobeying. And in terms of that, we are called upon to be prophets, to declare: “Thus saith the Lord.”