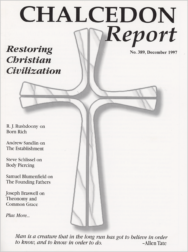 It is a privilege and a form of wealth to be born into a rich culture, and most Americans, although they fail to recognize it, are born rich. My father and others with an extensive knowledge of various cultures often remarked that the poor in America were richer and freer than most of the world’s peoples.

Every Christmas a great hue and cry arises from militant secularists, seconded by half-educated revisionist liberals, over any attempt to introduce a form of Christianity, even Christian symbols, into the public sphere, "public" being defined, erroneously, as state-financed and -controlled life. Feverishly citing "violation of the separation of church and state," and the "First Amendment," these secularists essay to excise every last presence of historic Christianity beyond the home or church, or more realistically, beyond anybody’s two ears. In contradiction to secularist charges, the First Amendment to the United States Constitution says nothing of the separation of church and state (the expression first appearing in a letter by Jefferson), and the meaning of the Amendment’s "establishment clause" is so readily deduced from historical investigation that only recent Supreme Court justices and ACLU attorneys could misinterpret it.

Samuel Blumenfeld’s newest book, The Whole Language/OBE Fraud, reveals the shocking story of how America is being dumbed down by its own educational system.

Rebels against God deny their responsibilities as defined by their Creator. They may seek to exercise authority not allowed them or they may abandon their legitimate duties. Our sin natures cause us to lose our bearings as to our rightful duties before both God and man. Redeemed man thus recognizes that he must look to.

Paganism and Social Progress in Africa: Some Preliminary Considerations

The dominant worldview for the past 100 years in the West has been evolutionary materialism. Though discussed in different ways, the fundamental assumption of the academic world since 1880 has been that the universe consists only of what we can detect with our senses. The material universe evolved out of primeval chaos through the combination of time and random chance. Evolutionary theory spread through Western universities with a vengeance, driving out the older Christian consensus, and applied to every area of knowledge: physics, chemistry, biology, psychology, sociology, etc.

But when Jesus saw it, he was much displeased, and said unto them, Suffer the little children to come unto me, and forbid them not: for of such is the kingdom of God. (Mark 10:14)

.The word volunteer comes from the Latin for "willing." A volunteer is a person who hears of a need that must be met, a duty that ought to be performed, an opportunity to serve, and says, "I will!"

Let us take the traditional Reformed view of the law as expressed in the Westminster Standards as uncontroversial, assuming the teachings of the Confession and the Larger Catechism as true and accepted and making it our starting point. Such a stipulation draws a boundary for inclusion in, and exclusion from, the discussion-group, restricting those who are the intended addressees of this essay to those who can begin with this assumption and thus meet for discussion on this common ground. The benefit of this limitation is simply the brevity of argument it affords by eliminating otherwise necessary steps in the argument.

Man and His Environment

What is man’s relationship to nature? Does he have an ethical responsibility to the world he lives in? Is he justified in controlling other forms of life? There are many answers given to these questions, reflecting a wide variety of worldviews. But in order to understand the environmentalism of today’s popular culture, it may be helpful to examine some of the major streams of thought that have built it.

In a recent conversation with a coach, we each lamented the lack of commitment that faces many organizations today. Many of my fellow pastors could provide a multitude of incidents (including empty seats in worship services) of members who have shirked their promise to be faithful in working for the Lord. I mention the church because it is there that I want to direct our attention.

The Challenge of Missions: A Message

Never have there been so many incredible opportunities for missionary work worldwide, yet there are tens of thousands of vacancies waiting to be filled on the mission field today. The harvest has never been so large—and the workers are frustratingly few.

The Founding Fathers on Religion and Morality

It is indeed sad that American children today are not being taught much, if anything, about our Founding Fathers and what their vision of America was. Even when I was going to public school back in the 1930s and ‘40s, very little was taught about the religious and moral beliefs of our Founding Fathers.

If It's Hebrew, Must It Be Holy? (Or Judaism-Lite)

The greatest national victory for modern-day Israel is not when in 1948 Israel became a nation. I would suggest, that an almost equally significant victory has been the seduction of many evangelicals as instruments of Jewish propaganda.

Do We Need the Government’s Permission for Everything?

It got me thinking: does the government have to approve everything we do?

The Restoration of Education 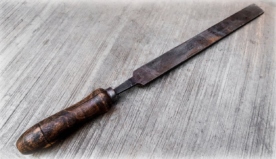 Christian and home schools must take the lead in reversing the effects of statist educators.

The people of the U. S. have changed greatly. I have a book (reprinted) from 1832, by Mrs. Childs: The American Frugal Housewife.

Letter to the Editor

Thanks for sending me your book "A Postmillennial Primer" #2. As Reformed Dutchman I grew up in a-mill surroundings. However, it was different from so much defeatist evangelical theology of today. For Kuyper taught us that all of human endeavor must be under the rule of Christ.

Ever since our first mother, Eve, facilely discovered multiple reasons to do what God had expressly commanded her through Adam not to do, we’ve proven to be, in our fallen estate, a darkness-loving lot that excels in creatively justifying any sin-embracing choice we desire to make. This ability wreaks havoc in ethics. No sooner do we learn the right thing than we begin paralogizing in the pursuit of what we think of as "freedom."