The origins of many of our traditions are often obscured by centuries or millennia of customs from a multitude of sources. There is usually not one history of such practices, but rather a complex set of many histories that blend into a modern usage. The Christmas tree is one such custom. Some believe it to be a very pagan symbol inappropriate for a Christian celebration. Others see it as an important part of Christmas celebration. Both views, in fact, can be correct. The tree has a long history of use in both pagan and Christian representations of life. These conflicting representations are, in fact, represented in Scripture itself. 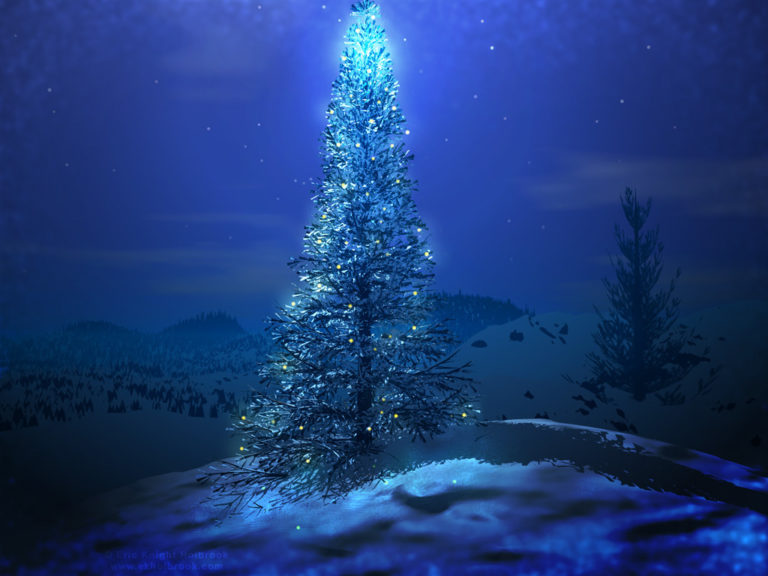 God represented the great eternal and moral issues before Adam and Eve by means of two trees. One tree was called the “tree of life” and was in the midst of the Garden of Eden. In a manner decreed by God that we cannot understand, this tree physically gave life to Adam and Eve and was fully accessible to them. It was, in effect, a sign of God’s covenant of life with Adam and Eve. The only other named tree was called “the tree of the knowledge of good and evil.” This was the only tree forbidden to our first parents.

To understand the meaning of “the tree of the knowledge of good and evil,” we must understand that God gave life to both Adam and Eve and gave them the prominent tree of life as a gracious gift. Moreover, God spoke to them, apparently on a regular basis. Their understanding of good and evil could come from one of two sources. They could learn in faith from their gracious God and Creator, or they could disobey and seek their knowledge from the forbidden tree. Satan, for all his deception, presented the sin of disobedience as a clear choice. His temptation to Eve was to play god, to elevate herself to God’s level and make her own ethical decision about what is right or wrong. This was the desire behind her choice, to “be as gods, knowing [that is, determining for herself] good and evil” (Gen. 3:5). Adam, we are told, was “with her”(Eve) and he “did eat.” There is no reason to believe he was ignorantly fed the forbidden fruit; he fully shared Eve’s presumption. Our first parents thus chose to seek knowledge of good and evil from Satan’s perspective rather than God’s. They thus plunged themselves and mankind into sin. God then barred them from the tree of life as an act of grace (Gen. 3:22-24). The tree of life would not have reversed the fall, but it would have given our first parents life in depravity. God’s grace was in barring them from this end, having already promised them a Savior (3:15).

The association of trees with life has continued. Even today we call needle-bearing trees that do not go through a period of dormancy evergreens, and California’s famous coastal redwoods are known by the species name sempervirens, or “always living.” In the Old Testament, there is a recurring reference to “groves” in the pagan culture that influenced and corrupted the Hebrews. These “groves” have been interpreted in different ways. Some think at least some of the references are to statues of gods, perhaps placed under landmark trees. Many cultures have worshipped the tree as a natural symbol of life. Assyrian beliefs make clear that culture’s custom. Altars were also  often placed outdoors under the belief that gods could not be confined. Placing them in groves of trees also hid the vulgarities of pagan worship from the eyes of all but the participants. Altars within such literal groves of trees is the apparent reference in both Jeremiah 17:2 and Ezekiel 20:28.

Nebuchadnezzar’s dream, recorded in Daniel 4, was of a tree in the “midst of the earth”  which “reached unto heaven, and the sight thereof to the end of the all the earth.…” This tree gave shade and protection to the creatures of the earth and “all flesh was fed of it.” Nebuchadnezzar’s dream was one of himself as a tree of life. He reached as mediator from earth to heaven, as a living link between the two. Such magnified views of monarchy were common to the ancient world. The state was represented in the person of the ruler, who was divine, or at least a mediating priest-king. Such regimes were more than statist; they were claims to messianic divinity. They desired to be “as gods, knowing good and evil” with absolute rule and armies. Any challenge to the ruler was both heresy and treason. With such men claiming to be the tree of life, it is not surprising that liberty as we understand it did not yet exist; liberty was a product of the rise of Christendom.

Nebuchadnezzar’s vision of himself as a tree of life was, however, only a dream. His own dream belied its reality, for his tree of life was shaken until its leaves fell and its fruit was scattered. Then it was cut down so that all men could see was its stump and roots, not in heaven, but “in the earth.” Nebuchadnezzar’s dream was destroyed and then he was personally humbled so that all would “know that the Most High ruleth in the kingdom of men…” (R.J. Rushdoony, Thy Kingdom Come [Vallecito, California: Ross House Books, 2001], 28-32).

Were this the end of Biblical teachings on the tree of life, we would be well advised to avoid all association of trees with religious symbolism. But the image of the tree of life was, originally, a representation of God’s gift, His covenant of grace to Adam and Eve. We are also presented with the image of the tree of life in Proverbs. There we are told that wisdom is a tree of life (3:18) and that the fruit of righteousness is a tree of life (11:30). The cross of Jesus Christ has been referred to as a tree. This has little to do with its wooden composition. The cross of Jesus Christ represented both our tree of life and, in a sense, our tree of the knowledge of good and evil. Like the former, its product gives life; like the latter, it trains our understanding of good and evil. Revelation thus places the tree of life at the center of the paradise of God, the new Jerusalem (2:7). It is in the  midst of the street, or community, and was “for a healing of the nations” (22:2). It was fed by the “water of life” that proceeded from the throne of God and His Lamb, Jesus Christ (22:1). God’s tree of life was a wonderful symbol of true life in His gracious salvation that He did not surrender to pagan usurpations.

Early Christian art self-consciously used the tree to represent life. Sometimes such art represented life immortal or life as a tree of God’s plenty. Trees were often associated with pictures of the Good Shepherd or representations of the raising of Lazarus (sometimes with the tree springing from the tomb itself). A green tree with flowers and fruit was sometimes contrasted with one that was dry and bare. (Smith and Cheetan, eds., A Dictionary of Christian Antiquities [Hartford: J.B. Burr Publishing Co. (1880), 1996]).

Medieval mystery plays decorated a tree to represent the paradise of Eden. These plays about the fall ended with the promise of the Messiah and were often preformed prior to the Christmas season with its stories of Bethlehem.

The tree is thus a symbol of God’s gift of life from Genesis to Revelation, from Creation to the New Jerusalem. In his sin, man has used God’s symbol of life for his own perverse purposes. The appearance of the tree in the New Jerusalem obviously means the symbol still remains acceptable to God. Certainly no remote medieval European uses of the tree were worse than those of the ancient Middle East. Though secularized, the essential meaning of the Christmas tree is still one of life in terms of the Person and work of Jesus  Christ. It is decorated to represent the beauty of God’s gracious gift. Fruits were long used as decorations and represented bountiful blessings that fulfilled men’s basic needs. The star or angel atop the tree represents the miraculous nature of God’s new tree of life — Jesus Christ and His cross.

The tree cannot be rejected as a purely pagan symbol, for God does not so reject it in Scripture. It has a very direct link with God’s providential salvation message. It also has a link with very obscene pagan ritual and even the messianic views of many men, of whom Nebuchadnezzar was only one. We can give up the symbolism of the tree of life (and even wish God would not use it in John’s vision of the new Jerusalem), or we can take back the symbol for our Lord. All of Christmas has been profanely secularized, but it is not the use of the tree that is to blame. Few know its use by pagans of any era. Its long usage as a part of Christmas celebration represents the fact that past generations, following John’s Revelation, reclaimed its use. They took dominion of that symbol for Jesus Christ. The problem with our modern celebration of Christmas is not its close association with the tree of life, but its increasing separation from the new tree of life, Christ incarnate.

God redeems man and regenerates his heart to serve Him. We must then conform our thinking and our customs to His service. If we shed as unholy everything that has been used by evil men, we will be in constant retreat and surrender. We must reclaim our thoughts, our actions, our institutions, and our customs for Christ, because He is Lord of all. Rather than reject the Christmas tree for its past association with paganism, we should glorify God that it has, in the modern mind, been linked exclusively to the celebration of Christmas. Now the church’s work is to reclaim Christmas from its secularization to its true purpose, a celebration of Jesus Christ and His advent.