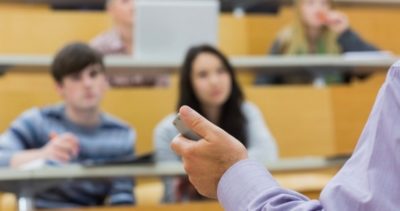 At first glance it might seem unnecessary to see a film that reveals the heavy-handed left-wing bias that dominates many, if not most, American colleges and universities. After all, we already know this, don’t we? And we don’t have to send our children to these aggressively secular, rabidly anti-Christian institutions, do we?

But we do have to pay for them with our tax dollars if they’re state universities or county colleges. And the problem is serious enough to have inspired two bills in Congress: H. CON. RES. 318, calling for American colleges and universities to adopt an Academic Bill of Rights, and HR 609, the College Access and Opportunity Act of 2005, to safeguard “student speech and association rights.” (For the full text of each resolution, see the “Students for Academic Freedom” feature on www.frontpagemag.com.)

Besides which, leftists always deny that restrictive campus speech codes even exist. In a recent informal poll taken by this writer on the michnews.com website, not one liberal respondent acknowledged that colleges and universities restrict free speech.

For those reasons, we ought to be interested in Brainwashing 101.

At the heart of the hour-long film is the experience of Steve Hinkle, a conservative student at California Polytechnic, who was harassed, threatened with arrest and expulsion, pressured to consult a psychologist, and subjected to a 7-hour grilling by the university’s attorney without being allowed an attorney of his own — all for putting up a few flyers advertising a coming appearance by a conservative speaker.

In the end, after a lawsuit, Hinkle walked off with $40,000 in damages paid by Cal Poly — but originally paid by the taxpayers of California.

Filmmaker Evan Coyne Maloney — tabbed “the Anti-Michael Moore” by the British newspaper The Daily Telegraph (http://brain-terminal.com/posts/2005/08/15/telegraph-profile) — tried to get university authorities to explain their behavior. All he got for his pains was to be run off the campus by security officers and threatened with arrest if he ever returned. Imitating Moore’s documentary style, he captured on film his efforts to interview the college president, who refused to see him. (Taking another leaf from Moore’s book, Maloney sets it up so that the reluctant interviewee looks like a double-talking knave. We are at liberty to ask how honest this is.)

Hinkle’s complaint against Cal Poly was an open-and-shut case, according to FIRE (Foundation for Individual Rights in Education) attorney Greg Lukianoff, who represented him. In trying to stifle Hinkle’s right to advertise a public speech, Lukianoff said, the college didn’t have a leg to stand on: the court order to pay damages was a foregone conclusion.

Maloney attributes this to a woodenheaded arrogance on the part of the leftist elite controlling the college. Unaccustomed to opposition, administrators ignored FIRE’s warnings and offered to settle the case without penalty simply by dropping the “charges” against Hinkle. Of course, the court ordered the “charges” erased from his record and damages to be paid.

“Students are being told they have fewer rights than they do,” Lukianoff said, adding that FIRE has represented students “in literally hundreds of cases” like this one. In a survey of 200 schools, he added, 89% of them have speech codes that unconstitutionally restrict the free speech rights of religiously minded and conservative students. Anti-Christian and liberal students are exempt.

At the University of Tennessee, Maloney covered the persecution of a Sikh student, Sukhmani Singh Khalsa, who wrote an article for a conservative students’ magazine. Because Mr. Khalsa wears a turban and a long beard, as is customary among Sikhs, he was mistaken for a Muslim. An email emanating from the university’s Issues Committee said, “The next time you see one of these rag-heads, shoot him right in the f—ing face.”

“The experience only confirms my view of the university as a dogmatic leftist institution,” Khalsa said — after the party who issued the death threat received no disciplinary action and the conservatives’ magazine was shut down from being a disruptive influence.

There’s plenty more where this comes from, abundantly demonstrating that Maloney tells the truth when he says the academic world is run by intolerant leftist ideologues, who try to stamp out dissent while proclaiming themselves the apostles of “diversity.” The film is fast-paced, easy to watch, and done in a light enough style to keep it from sounding doom-and-gloom. It’s available for $19.95 via Maloney’s blog site, Brain Terminal (brain-terminal.com). A follow-up, Indoctrinate U, is scheduled for release this year.

Maloney’s blog also features short videos he filmed two and three years ago, some of which have been shown on national television. Brainwashing 101 was voted one of the Ten Best Documentaries of 2004 at the Liberty Film Festival (conservative and libertarian films). At 32, he probably has a bright future ahead of him in documentary filmmaking.

Although there’s no evidence (yet) that the universities are succeeding in transforming America’s collegiate youth into a whole generation of Marxists, feminists, and robots, we are still entitled to ask why we ought to pay for it. These are public institutions, publicly funded. Our state and county officials owe us an explanation.

Maloney asks, “How did our campuses get this way?”, but is so busy proving that they are this way that he doesn’t get around to answering his own question. Maybe he’ll answer it in his next film.

But need we marvel that an antinomian secular culture breeds universities where men and women look to the wisdom of this world to answer life’s questions — worldly wisdom like Marxism, feminism, all kinds of radicalism, and, yes, conservatism? Jesus Christ, who is the answer, is not to be found in any of these “isms.”

Many of us will send our kids to college. In the long run, we hope Christian colleges will grow until they can compete successfully with the secular colleges — compete to the point where they draw away enough students so that the state universities must either get rid of such aberrations as “black feminist economics” or else go out of business.

In the short run, if our children must attend these schools and be forced to sit through anti-American rants in Engineering class, FIRE and other legal foundations stand ready to protect our rights; alumni associations are there to be pressured; and we are here to give our families a Christian grounding that will resist the academics’ efforts to subvert it.