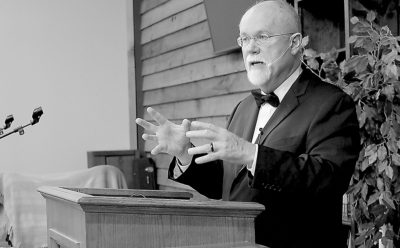 Although one would think they would be scheduled more often, church conferences on difficult subjects are fairly rare. We don’t have to look too far to understand why: some topics come off as depressing downers, and pew warmers prefer uplifting material. Attendees at most conferences don’t want to be challenged or pulled out of their comfort zones. Consequently, important Kingdom matters are left unaddressed and undone.

What a blessing it was for me to be invited to speak on the issue of abuse at the Church of the Living God, in Moulton, Alabama on April 27, 2019. This free conference (even the lunch was provided by the church at no expense to attendees) was structured around three one-hour lectures I delivered, followed by a lengthy question-and-answer session.

In putting this conference in motion, Pastor Jim Nelson recognized what very few Christian leaders understand: that the church is abysmally far behind in regard to these crucial aspects of our fallen world, and healing cannot begin while Christians sit on their hands on the sidelines.

Moreover, he understands that Christian Reconstruction must pervade every area of life and thought: not merely our pet projects and favorite talking points, but also the areas of life that most desperately need the light of God’s Word to penetrate them. If the Bible has the answers, we’d better be ready to handle the toughest of questions and not shy away from them.

It is evident that the liberal-progressive wing of Christianity (with whom we have countless serious theological divides), when confronting the many faces of abuse, has acted the part of the Good Samaritan (poor theology but merciful deeds) while the conservative wing of the church has steered clear of getting its hands dirty (mimicking the priest and Levite who preceded the Samaritan). Characterizing it using Christ’s words in Luke 10:31–32, we’ve “passed by the other side” while being quick to criticize the theology of the liberals who did bestow compassion on victims of abuse.

But this church in Alabama was unwilling to throw out the baby with the bath water, refusing to shrink from dealing openly with tough issues. One need not drink the social justice Kool-Aid to do the right thing—and in fact this was one of the most important points made that Saturday morning: that there is a conservative Biblical approach to abuse, one not anchored in or compromised by humanistic social justice theory. It is our ignorance of how to properly anchor our approach to abuse in Scripture that feeds our assumption that the entire topic is the rightful province of progressive humanism. And that assumption is dead wrong: the light of the Word must penetrate this domain too. Reconstruction is called for here, and when it is applied, liberation ensues on a much firmer footing.

Our starting point was necessarily grim, walking through different kinds of abuse and the mechanisms that fuel, enable, and exacerbate them. While the conference title was Domestic Abuse and the Church, the focus was deliberately broadened to encompass a wider range of abusers and victims. The damage done to the victims by various breeds of predator, the ins and outs of the process, needed to be laid out in detail and documented to the hilt.

Of particular note was the application of Dr. Rushdoony’s principle that man is a unity. The opposing view of a supposedly hard dividing wall between mind and body has led to a mechanistic reductionism: there’s software, and there’s hardware, and that’s that. This reductionism made it impossible to understand the impact of emotional or psychological trauma on the victim’s body, central nervous system, and neurochemistry. The last two decades of research have illustrated the unity of mind and body—and thus the pervasive nature of the damage done to victims—in compelling terms. “Sticks and stones may break my bones, but words will never hurt me” turned out to be a myth: explicit changes in brain-body chemistry have been painstakingly documented.

Sigmund Freud had buried the trauma theory of female hysteria because the implications of his research (that abuse of young females was endemic to the society of his day) were unacceptable to him. Consequently, an entire century was lost—utterly wasted—until the truth of the matter was rediscovered in the last several decades. Worse, the parallels between his women subjects in the late 1890s and the male victims of shell shock from World War I were papered over. The reality was that both kinds of patients had undergone soul-wrenching trauma: the linkage was simply written off.

You can’t have victims without victimizers, viz., predators, so we spent some time grappling with studies of the conduct of oppressors and the boundary violation process. Where families and churches are concerned, the ability of the predator to live a double life (showing one side to his or her peers, the other side to only the victim) is key to the perpetuation of evil.

Lecturing on the techniques and tactics of such predatory individuals reminded me of an early course in systematic theology I taught in the mid-1980s, when I devoted an entire Biblical anthropology lecture to the topic, “Man, the Liar.” That message had a poor reception: it was a depressing topic that the Bible exposes with troubling intensity. Thankfully, we weren’t going to leave the matter in that grim state. But relief and deliverance would have to wait until the third lecture, because the second lecture was devoted to the ugly truth that predators harm the victims, but congregations then turn around and destroy the victims.

The agendas driving my second talk, subtitled Circling the Wagons, involve the strategies of collusion that church leaders and congregations use to (presumably) protect the church from scandal. And these cover-up strategies become the second layer of oppression against the victims, exacerbating and intensifying the damage done by the original depredation, the original abuse. The stunning variety of techniques used against the victim (not the perpetrator!) embody a moral inversion. As Isaiah had said of the once faithful city, “righteousness lodged in it, but now murderers” (Isa. 1:21).

By taking inventory of the vocabulary of collusion (and I gave appropriate credit for the itemization as it was not original with me), conference attendees were able to grasp the severity, the gravity, of the problem too often infesting our congregations. They could understand why one Marcia Bezak committed suicide because no one in church believed her story about being sexually assaulted by her pastor. A week after her death, unequivocal proof of the pastor’s guilt came to light. But by then it was too late for the victim, who was revictimized by her own congregation. To repeat Isaiah’s point: righteousness lodged in it, but now murderers.

The Third Lecture: Light at the End of the Tunnel

The final lecture before the extensive Q&A session focused on justice and healing. Sanctions against the perpetrators (such as laid out in Ezekiel 34:10 and enforced by God’s own oath just preceding those sanctions) are the first major step. Scripture enforces a “one strike and you’re out” approach for all who hold spiritual authority, who purport to be shepherds or leaders or protectors of God’s flock. Healing for victims begins with the administration of justice and restitution. Without these, we’re merely “healing the wound of His people lightly,” as Jeremiah twice puts it. I referred to such shameful, half-hearted efforts as “Band-Aids on a compound fracture,” viz., shallow measures for show.

Yet I was able to parade several books that gave grounds for restoring fallen pastors, etc., all of which conflicted with God’s own oath in Ezekiel 34. My lecture decisively called for rejecting any medicines other than those prescribed by the Creator and Redeemer.

I then focused on two chapters of Isaiah: 42 and then 32, which lay out the response that is required in the midst of God’s Kingdom. The first passage speaks of not breaking the bruised reed or quenching the smoking flax, i.e., not inflicting further damage but following Christ’s example to deal gently with the abused and oppressed to further healing. The second passage calls out all men and women to be a refuge to those in need, and positions that calling as central to the Kingdom of God itself.

Isaiah 32 goes deeper yet, speaking of ears and eyes being opened (versus closed to the outcry of the oppressed), the ability of victims to express themselves with blinding clarity (for they’re responding to those who’ve made themselves a hiding place from evil), and the failure of those who live deceptive double lives to fool any more victims. This aspect of the building of His Kingdom was emphasized and anchored to the Messianic prophecy of Isaiah 32:1–8 to make our abiding, continuing obligations clear.

The Q&A session that followed allowed attendees to fill in the picture from the preceding three lectures. No less gratifying were the young people who swarmed me between lectures to dig deeper into how Christian Reconstruction can apply Scripture faithfully to the abuse crisis in our midst, across all categories of abuse. I harbor hope when the next generation steps up to the plate like that, and I pray that the video being edited from the conference sessions will have a wide circulation and deep impact.

Afterwards, one attendee asked, “How can we get you to come up to our church and present these messages?” “It’s easy,” I replied. “Just fly me in.”

{This article appeared in the June 2019 Chalcedon Report}