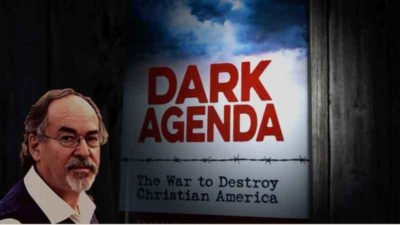 “The stated goal of the New Atheism is to delegitimize and extinguish the religious point of view.” --David Horowitz (p. 5)

David Horowitz, a Jew, loves Christian America. He has written this book to defend it. And it needs defending, he declares, because powerful left-wing forces are trying to destroy it. His use of the word “war” in the subtitle is intentional.

No one knows the Far Left better than Horowitz. He was born and bred to it. His parents raised him to be a revolutionary. As a young man, he edited RampartsMagazine, a hard-left publication.

He has completely changed his mind about all that.

Globalists and “citizens of the world”; Marxist academics; Hollywood airheads and Wall Street “open borders” types; sexual anarchists and a corrupted news media; secular zealots of the Democrat Party—there are almost too many culprits to list.

Indeed, one grows weary just by looking at the shambles which the Far Left has made of our culture. And the pace always seems to be picking up. Democrat states didn’t start legalizing “live birth abortion” (how they distinguish that from premeditated murder is beyond my comprehension) and “recreational” marijuana use until after Horowitz had published his book. Nor was he able to address the ever-accelerating push for “transgender.”

But even if you cut it off halfway through 2018, there’s still plenty to deplore. That Horowitz could have gotten the job done in just 172 pages is impressive.

Horowitz traces our country’s current predicament to the riots staged by radicals at the 1968 Democrat Convention (p. 162). “Over the next four years, the far-left radicals … marched into the Democratic Party and swept traditional liberalism away. They replaced it with a leftism that views American society as a system of oppressive hierarchies based on race, gender, and sexual orientation” (p. 62). The result was to give the Far Left ownership of one of America’s two major political parties—and they’re consolidating that ownership all the time.

With it they hope to “redefine” America.

“It took a Civil War and 200 years of sacrifice and struggle to achieve a society that approaches the ideals laid down in our country’s founding documents,” Horowitz writes. “That achievement is now endangered by a party committed to an identity politics that is the antithesis of the ideas and principles the founding established. Instead of cherishing religious liberty and individual freedom, the Democrats offer us a reversion to tribal loyalties and collectivist values. They regard immutable origins—skin colors, ethnicities, genders, and classes—as primary factors in judging individuals and determining what is just” (p. 172).

A nation cannot long endure that is half free and half collectivist.

When I read a book for review, and find a detail I’d like to bring to the reader’s attention, I underline the text and dog-ear the page so I can easily find it again. It was with some dismay that I discovered, when I’d finished reading Dark Agenda, that I’d folded half the pages down!

It’s that full of meat. For instance:

“Gay rights swept the country, bringing with it an AIDS epidemic and a radical redefinition of marriage by the Supreme Court. Most of those deaths could have been prevented if the public health system had not been crippled by radical ideologies” (p. 121). “Sweeping attempts at social transformation”—mostly by the courts, because none of these projects had enough public support to be legislated—“have brought disaster” (p. 123).

Horowitz makes a telling point. By resorting so often to the courts to impose their schemes upon the rest of America, the Left made an end run around the normal processes of shaping public policy. With public debate, political deal-making and compromise, you don’t have one side getting everything it wants, all at once, with the other side getting nothing. For one side consistently to get nothing, while the other walks off with such gaudy trophies as abortion, “gay marriage,” and Obamacare—all thanks to rulings by unelected judges—is apt to infuriate the losing side. Horowitz thinks the courts should have recognized that as a serious problem and restrained themselves. But of course they haven’t. The Left didn’t want them to.

“Democrats could have responded to Roe [v. Wade] in a variety of ways. They could have worked to make adoption procedures less cumbersome or fought to extend healthcare benefits to help women whose economic circumstances might incline them to seek the relatively less expensive alternative of an abortion … They could have supported a constitutional amendment turning the issue back to the states where it had been before Roe. Any of those approaches would have better reflected the public’s ambivalence about abortion. Instead the party leadership largely bought the feminists’ interpretation of Roe” (p. 99).

That interpretation, Horowitz adds, is that “women should be morally autonomous and free of any responsibility toward their pregnancy … a near-absolute right for a woman to have an abortion without consulting anyone, including the father of the unborn child” (p. 100).

But that’s what makes it war. Why settle for compromise, when you can conquer? The same spirit of triumphalism informs every left-wing project for America.

The only problem with this book is that Horowitz offers no solution. We are, he says, “a nation divided” by fundamental ideas, non-negotiable ideas, with a political process from which compromise has been removed as an option and zero-sum games prevail.

As Christians the weapons of our warfare are spiritual, not carnal. We do tend to get in trouble, and even to defeat the very ends for which we say we’re fighting for, when we try to use force to get our way.

Does anyone believe slavery, for instance, could only have been abolished by recourse to the Civil War? That there was nothing to be gained by brotherly love, conciliation, compensation to the slave owners, or technological progress that would have made slavery not only redundant, but a waste of good money? And as for that war’s bitter aftermath: there were Southern leaders, like former Confederate General P.G.T. Beauregard, who urged his fellow Southerners to welcome the freed slaves, with whom most whites already shared many elements of a common culture, into full participation in civic life. But due to the savage prosecution of that war, Southerners were not willing to listen.

We do not have to be ruled by radicals. We don’t have to send Christian children to public schools run by Far Left teachers’ unions, or to colleges and universities that are even worse. We don’t have to tune in to TV shows, or buy tickets to movies, that mock the Word of God and vilify God’s people. Strong faith, strong families, and the power of a good example are nowhere to be found in the left’s arsenal—where bad examples abound. Their failed utopias present a bleak landscape of gulags, economic stagnation, barbed wire, and mass graves. That so few of our young people are aware of those examples should shame us for what we’ve allowed public “education” to become. How different would things be if Christian children had a Christian education!

It’s a bad situation in the Western world today, but not a hopeless one.

How can following the teachings of Jesus Christ ever be hopeless?