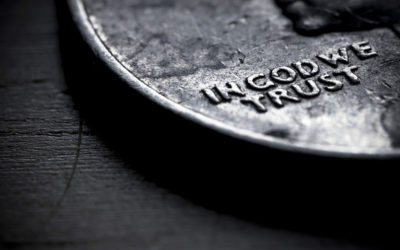 What men trust in becomes the power over their lives, and the god a man worships is known by what a man trusts. Our coins still read, “In God we trust,” but men address their hopes and prayers to the national and state capitols and then wonder why God abandons them.

St. Paul declared, “Be not deceived; God is not mocked: for whatsoever a man soweth, that shall he also reap” (Gal. 6:7). Harvest time is approaching for our age.

Men have sown unbelief, debt-living, a trust in what civil government can do for them rather than faith in God. They have looked to politicians for salvation rather than to Jesus Christ, and they have paid their taxes to the state and neglected their tithes to the Lord. They have given their children everything except godly nurture, and they have been rich to themselves and poor to God. Now, as they begin to see the harvest developing, they ask blindly, “Where did I go wrong?”

They want a harvest of blessings they never sowed for, and they want a Sabbath peace and rest they have always defiled, and they wonder at the results because they are blinded by their sins.

The house without foundations is destined to collapse in the storms of history, whereas the life built upon the rock of ages, Jesus Christ, will emerge secure and strong.

Look to your foundations. What is your life founded on? Where is your trust? Your life depends on it.