I spent a week recently at Fairfax Christian School in Fairfax, Virginia. Its lovely grounds and beautiful building house a remarkable school of amazing caliber. Many of its students are of superior intelligence and from outstanding homes. The case of one particular student especially interested me. This boy entered the fourth grade there in September of 1969. The parents had been newly transplanted to Washington, D.C., and they had a problem: the boy was obviously retarded, as public school records for the first three grades indicated. Would the school take him until they could locate a special school at a later date? The school did, and the boy began to develop. At the end of the fourth grade, psychologists tested the boy. His I.Q. was very low, only 67, but he tested at grade level and above in all subjects in terms of a standard achievement test.

Impossible, some tell me. But it happened. Why? A superior curriculum, plus superior and thoroughly Christian teachers, was partly the reason. But St. Paul stated it plainly: “For the letter killeth, but the spirit giveth life” (2 Cor. 3:6). The mere form of religion, Paul declared, is dead and kills man’s hopes, but the Spirit of God gives life. Man may go through the motions, but without God’s Spirit, there is no life nor true power.

This is our problem in education, politics, and all things else. We try to make some law, curriculum, or manipulated environment do what it cannot do. The boy at Fairfax found life in his classroom: a Christian teacher concerned about him, Christian instruction to which he responded, and a faith which moved his heart and his teachers’ to the directions of the Holy Spirit. Instead of being “killed” by the competition of superior students, the boy was given life and hope by a truly Christian school.

It is high time that we realize that laws, environmental changes, and a variety of helps, however good and often needed, are still not the answer. Of themselves, they can “kill” if they are substituted for the real answer, which is the Lord Himself and His Spirit breathing life, meaning, and power into our activities. 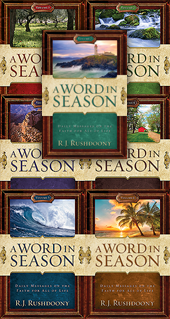