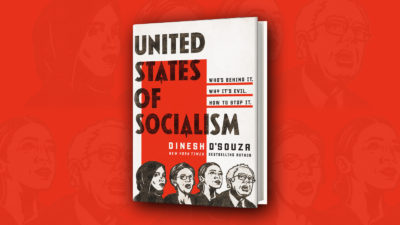 The United States of Socialism by Dinesh D’Souza
(New York: All Points Books, 2020)

America’s future as a free, constitutional republic, with a free market economy, is at stake. An army of socialists want to tear it down and replace it with a supposed utopia—owned, operated, and controlled by themselves.

They have already made considerable progress; and if they are not defeated, if they aren’t stopped, they will forge ahead—violently, if that’s what it takes—to finish the job.

This is a very meaty book by conservative activist and commentator Dinesh D’Souza. I soon found myself underlining and circling more quotes than I could ever hope to use in one review. But it’s an important book, a book we should read, and it has to be reviewed. So I’ll try to tighten my focus. Remember there’s a lot more to it than this.

What Do They Want?

Socialists—most of them are Democrats, prominent in their party—will tell you that all they want is a “fair distribution” of wealth, a government that sees to it that every American’s basic needs are met, more “democracy”… and “justice.” Don’t expect them to define what they mean by “justice.” Leftists never do.

They say they want a nice, cozy, secular state modeled on those of Scandinavia, ignoring the fact that the Scandinavian countries largely abandoned their socialist experiment in the 1970s (Chapter 4). What remains of Scandinavian socialism today survives because there is very little similarity between the United States and Scandinavia.

“What I deny is that it can be imported here,” D’Souza says (p. 139), “… because we don’t have the conditions for it. Our type of society doesn’t permit it.”

Scandinavian socialism was based on “the uniformity of Nordic culture” (p. 141). Norway, Sweden, and Denmark don’t have a permanent, sprawling under-class, a fetish for cultural “diversity,” a legacy of bitter class warfare, massive political corruption, and a socially and politically fragmented populace. But we do.

They say they want the kind of socialism Scandinavia has (or, more accurately, had); but what they really want is something much more like the disaster that is Venezuela’s socialism. D’Souza’s wife is Venezuelan: he knows what he’s talking about.

Before Hugo Chavez led it into socialism, Venezuela was the most prosperous country in Latin America. Now its defining features are food shortages, on-and-off electricity, 4 million people fleeing the country—and on top of it all, a tiny ruling elite, preposterously wealthy and determined to remain in power no matter what it costs (pp. 150–152).

Why Do They Want It?

Quite simply, they want it because such an arrangement would give them, personally, power and wealth beyond mere avarice. They seek to mastermind a thorough “transformation”—ideologically, socially, culturally—of America (p. 72). It would give them total control of every aspect of American life.

In short, they want … everything.

D’Souza doesn’t discuss a religious dimension, or even a psychological dimension, to the socialists’ insatiable lust for wealth and power over other people. But can we see this lust as anything other than satanic? As for what would happen to our country and its people, the poet John Milton captured the essence of this lust when he had Satan say, “Better to reign in Hell than serve in Heaven.”

Their socialist America, a la Venezuela, would be Hell; but they would be its rulers.

First, a few facts and figures to illustrate the personal wealth accumulated by big-name socialists in the course of “helping the poor” (p. 213, etc.).

You will have noticed they are all Democrats. “Are there any prominent Democrats who resist this collectivist terminology?” D’Souza asks. “There are not” (p. 17). “The progressives and socialists are largely unified behind a Democratic Party agenda that can accurately be termed socialist.” That agenda features “a national healthcare system” (Obamacare), Universal Basic Income, free college tuition, and the Green New Deal (p. 18), the latter claiming that “man-made climate change” gives us only twelve more years to completely transform into a socialist economy. Otherwise it’s Doomsday.

Socialism in America is the leadership of the Democrat Party, an army of useful idiots recruited from the colleges and universities, and those major institutions that they’ve managed to turn against us: the “news” media, Hollywood (useful idiots with fame and money), the “deep state,” and our whole academic establishment. It’s a fearsome combination, and socialists expect it to give them control and ownership of our country.

If you try to name a leading Democrat who is not a socialist, you will fail. There are no such Democrats left in the party’s higher echelons.

How They Mean to Win

This can be stated simply.

Fake news: “The media is critical because it is the channel through which the American people get virtually all their political information” (p. 227). “Without the media, no one in America—not even critics of the media—have any comprehensive idea of what’s going on” (p. 228). America’s virulently left-wing media control the flow of information.

Intimidation: Timid Republicans and business leaders fear the power of the media (p. 228), which can destroy their reputations and turn them into perceived enemies of “the people” and “justice,” etc. Not to mention hostile college crowds that shout down speakers, masked Antifa thugs who attack people on the streets, and a racial grievance industry that brands all opposition, all criticism, no matter how trivial or ineffectual, as “racist.”

Indoctrination: Academics, self-anointed intellectuals, teachers’ union bosses “want to be the ruling class” (p. 71). So they “teach” children, teens, and young adults “naked propaganda” (p. 224) aimed at the supposed, but never debated, defects of America and capitalism. Public schools have embraced and enthroned, for instance, Howard Zinn’s A People’s History of the United States “to generate an anti-American narrative” (p. 37). This is daily fare in most high schools and colleges.

How Can We Defeat Them?

“We would be content to be left alone,” D’Souza writes, “but the left has no intention of leaving us alone. They want us to submit to them. They want our children. And they want the country—they are ruthlessly dedicated to its takeover … [W]e don’t have the same ‘all-in’ commitment to dominating the country that they do. So we must develop it” (p. 255).

“Contest their domination of the media, and academia, and Hollywood. We need to recapture some of that cultural space. We need to build our own megaphones.

D’Souza is much better at describing the problem than he is at detailing a solution to it. Yes, we need to create news organizations that will tell the truth. This work has begun, and will take time and money.

Hollywood these days relies on foreign markets, especially China—with whose communist regime the producers curry favor—and is probably going to lose influence here at home as American audiences gradually lose interest in their product. Oscar show ratings have not exactly lit up the skies, lately. There has never been a more propitious time for the growth of new media serving as an anti-Hollywood.

As for our rigidly leftist public schools, colleges, and universities—

For how many years has Chalcedon been crusading for Christian homeschooling? In how many trials did R.J. Rushdoony testify as an expert witness in defense of homeschooling? He didn’t work in vain: despite fierce opposition from the left, Christian education has grown.

And suddenly, earlier this year—but after D’Souza had written his book—we had the COVID-19 pandemic and all the schools, and most of the colleges, were closed! Suddenly millions of young people would either get homeschooling or no schooling. As I write, it’s still being debated whether the public schools will reopen in September.

In 2018 the U.S. Dept. of Education estimated there were 2.3 million American children being homeschooled (nheri.org/homeschooling-population-size-growing)—about 3% of America’s school-age population, not counting those in Christian schools.

When the schools closed in 2020, those numbers must have increased by several orders of magnitude.

The question is, how many of them will stay in homeschooling, once the public schools reopen? The answer must be, a lot more of them than there were.

As for the colleges and universities, which furnish the Far Left with most of its ground troops—how many college students and their families have learned that studying at home, online, is infinitely less costly, and quite possibly more efficient, than physically attending a university. How many of them won’t bother to go back, once the colleges reopen? And how many of those overpriced indoctrination centers will go bankrupt due to shriveling enrollment?

What might be accomplished by a wave of Christian schooling, and a commitment to reconstruct our culture as a Christian culture? As we’ve seen by the success of the left, it doesn’t take a majority. As Rushdoony often said, and of course he was right, “History has never been dominated by majorities, but only by dedicated minorities who stand unconditionally on their faith.” This is our time and opportunity to provide such a minority.

What leftists can do, Christians can do. But by speaking truth, not lies; by injecting spiritual health, not toxins, into the culture; by educating their children themselves instead of turning them over to leftist teachers and professors; by turning to God and trusting in His strength, His righteousness, and not our own; by putting good and godly men and women into positions of authority and standing firmly with them when the game gets rough; and by repeatedly and doggedly exposing socialism as the failure that it is and always has been.

We need not ape their tactics. We don’t want a Christian Antifa beating people up and torching buildings.

Starve the corrupt news media of its audience, simply by turning off the TV set, and watch socialism lose its voice.

And don’t go along to get along. That only means they’ll eat you last.

Book
Our Threatened Freedom: A Christian View on the Menace of American Statism
Book
Philosophy of the Christian Curriculum, The
External Link