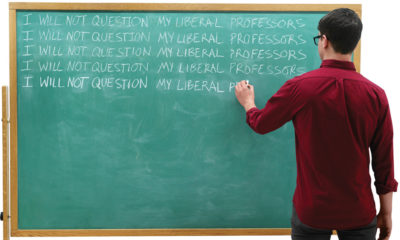 How did America’s colleges and universities turn into fortresses of Political Correctness where feminists and neo-Marxists rule and Christians had better keep a low profile?

Or is that an exaggerated picture painted by urban legends and the media?

Two veteran academics helped me try to find the truth.

Professor James McGregor teaches medical ethics and the philosophy and history of science in the Massachusetts state college system, in which he has been employed since 1970.

In addition to having more than 60 years’ academic teaching experience between them, both professors teach at more than one campus each semester. And both are Christians: Miller a Lutheran, and McGregor a Roman Catholic.

How Bad Is It?

The degree to which campus life is dominated by the Hard Left depends very much on the individual school, Dr. Miller said.

“At the schools where I teach, the culture is more middle-of-the-road — at least compared to a school like Penn State,” he said. “I haven’t actually seen too many excesses. I’ve heard of some, but I’ve never been pressured over anything I’ve said in class.”

Professor McGregor’s situation is very different. For almost two years, he’s been fighting efforts to revoke his tenure. Although he has been active in Right to Life, the Christian Coalition, and other Christian movements in Massachusetts, he does not believe he’s being persecuted for his religious faith.

“My real offense is to practice genuine pluralism in my philosophy course,” he said. “I act according to my belief that my students are quite capable of making up their own minds — and that does not conform to the prevailing leftist bias.”

McGregor has been subjected to an endless cycle of hearings, postponements, and depositions, all the while teaching a full schedule of classes. He has recently decided to seek representation from a pro-family legal foundation.

“I guess self-censorship has become almost second nature to me by now,” Dr. Miller said. “In the academic world, religion is avoided in conversation. In my kids’ papers, if they have to mention religion, they apologize for it before and afterward.

“The real fear is that someone might say something politically incorrect and wind up getting sued. That’s what people are afraid of. With all this political correctness, you have to be cautious.”

Definitions of “sexual harassment” or “intimidation,” for example, are so elastic nowadays, the professors said, that it’s hard to anticipate exactly what kind of language a thin-skinned student or colleague might find offensive.

“Academic culture is an illustration of the error of abstruseness,” McGregor said. “Are academics smarter than other people? Of course not. But because their knowledge is so specialized, they themselves believe they’re smarter, and blue-collar people tend to believe it too.

“Blue-collar people either just ignore academics, or they elevate them. These are the experts, the brains. And because academics have so little contact with the general public, they come to believe in their own superiority.”

The result is a culture of intellectual elitism that resists change and does not respond to changes in the wider culture outside the ivory tower.

“The university is a sheltered environment,” Miller said. “So you see Marxism disappearing from the real world while remaining popular in academia.

“Marxism is a utopian scheme, and academics often like neat, closed systems. They don’t have to be tied very firmly to reality. They can make all these theoretical pronouncements, but they don’t have to implement anything.”

“They’re allowed to close themselves in,” McGregor said, “and it leads to stagnation.”

“Some of what these people say is so radical, even shocking — and yet they’re as powerless as guppies,” he said. “All they can do is browbeat kids who might oppose them.

“The doctrine of academic freedom encourages some to be exhibitionists. It’s so easy to be a Ward Churchill and say strange things, get a lot of media attention, and be a big star in the lecture hall. You have a captive audience; the students have to listen to you. And academic freedom means you can say anything you want without being accountable for it. It leads to a kind of delayed adolescence.”

Finally, he added, the acquisition of tenure — perpetual job security — encourages some academics to indulge in rhetorical excesses.

Given the effects of cultural insulation, elitism, and lack of accountability, why do so many academics line up on the Left? In an environment conducive to silliness, why don’t we see large numbers of monarchists or fascists?

“It has to do with predisposing yourself to a materialist worldview,” Professor McGregor said. “If you assume only empirical truth, you’re not in the real world anymore. You’ve lost more important forms of discourse, like religion and poetry.”

“In the John Dewey era, around 1900,” Dr. Miller said, “American literati and other intellectuals began to substitute human scientific effort in place of God. Henry Adams wrote an essay, ‘The Virgin and the Dynamo,’ about religion giving way to the sciences. Before World War I there was a crisis of faith among the literati — and they never got their faith back. The academic world became an ideal breeding ground for Marxism and other leftist ideologies based on materialism and faith in human science.”

Colleges are so ardently leftist today, he said, because the left-wing student activists of the Viet Nam era are now deans, professors, and administrators.

“These are all people who’ve been working for 30 years to set this up,” he said. “They’re tenured academics who work the system. The leftism is all from the top down, with no demand for it from the students.”

Are Students Being Brainwashed?

“Most of the students really don’t understand or show an interest in politics,” Miller said. “They don’t buy it, but they let the loudmouths talk.

“It’s not like the Viet Nam days, when every kid had a political opinion. I suspect that most of the students belong to a silent majority that’s not anti-Christian, anti-family, or anti-American. Maybe they’ve absorbed a kind of vague liberalism, but I think that’s about as far as it goes. Really, they see all this fuss and rebellion as just another part of the college experience.”

“If a person wants to hang on to his faith,” he said, “there are all kinds of religious houses, chaplains, associations, and other facilities to help him do it. Most schools have them, and just about every denomination is represented. A Christian student can find plenty of moral support on campus, if he wants it.”

(For a closer look at Christianity on campus today, see “Evangelizing the Ivy League,” http://www.chalcedon.edu/articles/article.php?ArticleID=122.)