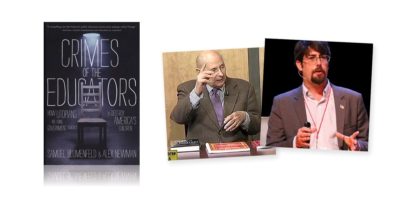 Crimes of the Educators by Samuel Blumenfeld and Alex Newman

“I don’t mind saying it has been a disaster, as long as it’s clear to everyone that it was done with the best of intentions by a lot of really committed people.” --Jerry Treadway, San Diego State: whole language proponent (p. 117)

When even the education theorists admit that their program has been a disaster, you know “education” itself is in trouble.

Authors Samuel Blumenfeld and Alex Newman make two points that must be taken to heart.

America’s public education system is beyond hope of salvage. It was been purposely created and shaped to be a failure (see The Messianic Character of American Education by R.J. Rushdoony, Ross House Books, 1995 edition). It cannot be fixed. It cannot be reformed.

The only right and reasonable thing for parents to do is to remove their children from this failed system and either homeschool them or enroll them in a Christian school or in a private school where the follies and errors of public education are purposefully avoided.

What are the “crimes of the educators”? This book lists them.

Failing to teach children to read, so that they grow up to be truly or functionally illiterate. This crime has been accomplished by replacing instruction in the alphabet and phonics with completely inadequate “look-see” or “whole language” methods.

Abusing children by drugging them into quiescence when they rebel against the boredom of the classroom by fidgeting, talking, looking out the window, surreptitiously playing with toys—all normal behaviors of bored human beings.

Abusing them by “teaching” them to reject God, their country, and traditional moral standards, and to give unquestioning acceptance to such left-wing shibboleths as evolution, man-made climate change, sexual anarchy, socialism, and all the rest of the Far Left fun-pack promoted by the teachers’ unions and the teachers’ colleges.

Failing to teach, adequately, basic and necessary skills in arithmetic. Many Americans grow up having no grasp of numerical operations needful in everyday life.

And those are just the felonies. We haven’t got space to list the misdemeanors. Boil them down to “teaching things that aren’t true.”

Blumenfeld, a pioneer in America’s homeschooling movement, devoted much of his labor to using phonics to teach reading—very often remedially, trying to undo the damage wrought by “whole language.”

In Chinese, for instance, there is no alphabet. Each and every word is represented by a “character,” or symbol, which must be memorized. Some of them are similar enough to others that the reader can probably guess the meaning. Chinese people have been literate for thousands of years. But even so, a completely unfamiliar character will stump the reader.

By contrast, Western nations have, for some three thousand years, relied on alphabets. If you know the alphabet, you can sound out any written word. This is a method of reading altogether different from “word recognition” and uses a different region of the human brain. An American student can learn to read Chinese: but to read English words, written using the alphabet, as if they were whole Chinese characters—well, that’s the part that Mr. Treadway admitted has been a disaster.

You can read Chinese, and you can read English. We call them both “reading,” but they are two completely different operations, carried out in different regions of the brain. “Whole language reading” is nothing but an attempt to read alphabetically-constructed words as if they were whole Chinese characters, and to use one part of the brain, which is not suited for it, to do a job more properly belonging to another part—rather like using a hammer instead of a screwdriver to drive in a screw: inadequate at best, and at worst, a disaster.

Years and years of test scores prove that it has been a disaster than can be measured.

Rotten to the Core

Then there’s Common Core, the ambitious attempt by statists to impose “standards,” set by federal bureaucrats, upon every public school in America. By 2014, when this book was published, Common Core had already worn out its welcome. Even the teachers’ unions were speaking out against it (p. 263). Even Far Left New York Gov. Andrew Cuomo admitted Common Core had “a flawed implementation” resulting in “frustration, anxiety, and confusion for children and parents” (p. 265).

The authors predicted in 2014 that “At this point, it is safe to assume that the movement to stop Common Core will continue to grow, and the political class will have a tough time being able to resist public demands indefinitely” (p. 270).

Turning to Education Week (www.edweek.org/) for an update, we find that in 2018 four states—Arizona, Oklahoma, Indiana, and South Carolina—had repealed Common Core; with four other states—Texas, Alaska, Nebraska, and Virginia—never having adopted it in the first place.

But there’s a rub. According to Education Week (Nov. 13, 2017), “rewrites” in 24 states “preserved Common Core’s most important features,” while much criticism was deflected simply by dropping the term “Common Core” and calling it “college and career-ready” instead. “We may not be talking about them anymore, but in one form or another, we are still living with Common Core standards every day.” It seems the public has not yet caught on to the subterfuge.

A faint silver lining, as reported by Education Week: teachers have learned that they can teach anything and claim it to be Common Core standards-based—“There is nobody in a position of authority to contradict them.”

If you think our leading educators are up to the challenge of remediating public education, think again.

In 1993, the National Center for Education Statistics reported that some 90 million (!) Americans were barely literate. Secretary of Education Richard Riley responded: “This should be a wakeup call for all Americans to consider going back to school and getting a tune-up” (p. 18).

What? The schools failed to teach you to read the first time around, when you were going there five days a week for thirteen years. And this time they’ll succeed?

Low test scores? Easy to fix! In 1996 the College Board decided to “recenter the scales, based on a more contemporary reference group. This means that the average score will once again be at or about the center of the scale—500—for a new reference group from the 1990s …” (p. 20)

So with average test scores dropping lower and lower every year, they simply redefined “average” and—presto! An “average” score in the low 400s was suddenly 500. Suddenly everybody’s smarter.

You wouldn’t think the public would fall for this, but who reads education news that carefully? Test scores were down, but now they’re up again, so someone must have solved the problem. Our schools must be all right, after all. Besides which, many of the parents whose kids were getting low reading scores are themselves the victims of a shoddy public education. They can’t read very well, either.

Dishonesty, coupled with routinely employed sleight of hand, suffices to protect the educators from being held accountable.

How can we expect to reform or repair an institution so addicted to double-talk, so wedded to deception, as our public education system? The educators don’t own up to problems, they don’t solve them; they just skate over them. Indeed, some of what we would call problematic—indoctrinating children into left-wing politics or immoral sexual behaviors, for instance—the educators see as their very mission in life: that, and even larger pay and pension checks for teachers and administrators. And they can always invent more jobs for more educators. When they do admit to any kind of problem whatsoever, their solution is always more staff, more money, and more prevarication.

As I write this, the North Carolina legislature is discussing a proposal to lower the failing “F” grade to 39 percent. Currently 60 percent is a failing grade. Suddenly all the kids at the bottom of the scale are 21 points smarter, as it were (https://www.local10.com/education/state-proposes-lowering-f-grade-to-just-39-percent). The selling point here is that it “would allow underperforming schools to continue operating.” We are not told why they should continue operating. Who wants his child to “graduate” from high school with a grade point average of 40? What will that diploma be worth?

“Despite all of the utopian developments on the horizon, and taking place at this very moment, there is one very bright spot. That is the emergence of the fast-growing homeschooling movement” (p. 289). In 2014, there were an estimated 2 million children being homeschooled in America.

Since then, a current figure is not available; but the estimated total for 2016 was—depending on whom you ask—some 2.3 million (https://www.nheri.org/homeschool-population-size-growing).

“Even before Common Core, homeschooling numbers were growing about seven times faster than enrollment in government schools” (p. 290). And, importantly, “Countless studies show that homeschoolers do very well academically. Indeed, in 2012 the College Board reported that homeschoolers scored an average of 71 points higher on the SAT than the national average—518 in the verbal section and 525 in math compared with the average of 506 and 514, respectively” (p. 290).

Since this book was written, homeschooling software and other resources have become better, cheaper, and more accessible. Nor should we fail to mention homeschooling co-ops set up by groups of parents working together, and Christian schools, and private schools where the errors, inadequacies, and misdeeds of public schools have been purposely and carefully avoided. These are all better than public education.

Let me close with an anecdote from my own teaching experience.

Many years ago, teaching eleventh-grade general math at a public high school, students complained to me that they couldn’t possibly “do fractions,” it was just too hard. Only a very few of them could, for example, work out the sum of one-fourth plus three-eighths (convert one-fourth to two-eighths, and the answer is five-eighths).

A few days later, teaching sixth grade at St. Helena’s Catholic School, their math lesson was exactly the same material that had confounded juniors at the public high school. But here every child in the class mastered the lesson and was ready, and even eager, to tackle the next lesson: no long faces, no whining, here.

Even without the Utopia, It Still Stinks

There is also a chapter in this book on some of the more extravagantly utopian dreams of globalism’s biggest movers and shakers—schemes in which they see the control and manipulation of public education as a key element. I pass over it because even if not a word of it were true (and more than just a few words of it are true), even if it were nothing but the pipe dreams of self-important gasbags, public education in America would still be a disaster, our children would still be coming out of school as functional illiterates, and it would still be costing us a fortune.

If you’re reading this on Chalcedon’s website, chances are you already have second thoughts about the value of a public education. This book will give you third and fourth thoughts, too—and equip you with information with which you may be able to convince a family member or a friend to try, or at least look into, homeschooling.

Education is really much too important to be left to the educators.

They have not earned our trust.

Book
Messianic Character of American Education, The
Book
Victims of Dick and Jane and Other Essays, The
Book
Harsh Truth about Public Schools, The
Book
IndoctriNation: Public Schools and the Decline of Christianity
Book
Intellectual Schizophrenia